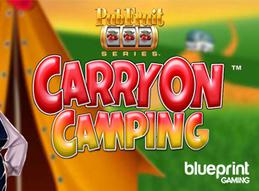 Game developer, Blueprint Gaming, is paying tribute to one of Britain’s most revered comedy serials – Carry On.

Carry On Camping is the seventeenth film in the long-running and illustrious comedy series that was started in 1958 and has since shocked and delighted the Great British public with its bawdiness and outrageous humor.

After the series ended in 1992 with the final film, the public had to look elsewhere for their dose of raucous and raunchy humor – but no more!

That’s because the developer has revived the classic films with their branded video slot adaptation of the same name.

“Oh, hello! The Carry On franchise is a comedy classic and we’re thrilled to welcome iconic characters Sid, Hattie, and Kenneth to our Pub Fruit Series.

“The Blueprint design and development team have ensured that every aspect of the gameplay will appeal to fans of the series, which is sure to be a wild and fun experience for players.”

The film, just like the game counterpart, finds the gang of misfit heroes journeying to a campsite called Paradise where nudist wishes are supposed to come true.

But, in classic comedy fashion, instead of a paradise full of good-looking women, they find a run-down swamp full of boring families and a stern school matron.

How will they deal with this predicament?

Find out in this 3x3 game that adapts the famous movie into a classic slot with some outrageous and exciting features.

…is guaranteed in this comical effort because there is a Feature Round where players get the opportunity to reach the Big Money feature and leave the campsite with some seriously big wins.

Also, players who land on the Super Pick in the active zone will activate the Pick Me Bonus where they can choose “Sid” icons to be awarded one of five bonus prizes including the chance to get directly into the Carry On Camping Bonus Round.

This game is the latest in the developer’s Pub Fruit Series in which they draw on their rich land-based heritage to create titles that incorporate traditional AWP functionalities for the online casino market.

Blueprint is a UK-based studio that is part of the Gauselmann Group from Germany. The company creates innovative games for the global igaming market including land-based, online and mobile sectors. Their games are available on over 100,000 land-based terminals in the UK, Italy, and Germany.

The company is also known for using Megaways in its game to create even more engaging games such as Tiki Treasures and Gods of Olympus.