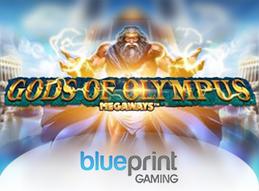 Game developer, Blueprint Gaming, is taking punters to the world of Olympus and its many gods where ambrosia and nectar flow freely.

The Gods are rising yet again to bestow their diving grace on those brave enough to spin the reels of this action-packed offering.

And this time, it’s Megaways. On license from Big Time Gaming, Blueprint has incorporated this mega-popular mechanic which extends the number of ways to win to a dizzying 15,625.

When the subject is Olympus and Greek Gods and Zeus himself is making an appearance, everything needs to be appropriately grand.

…there are also many bonus features that mean this game is no dull history lesson – it’s an adrenaline rollercoaster of high volatility and over-the-top features.

Blueprint Gaming has pulled out all the stops and made a very feature-rich offering.

There are extra spins and a random modifier chance…

The random Zeus event on the reels is called Zeus God of Thunder Power and has five different kinds of thunder.

Each confers bonuses to be applied to the spin that triggered them. Wild Thunder will see 10 multiplier wilds be added to the reels. Colossal will convert reels into colossal reels, Mystery will add mystery symbols, Bonus adds bonuses, and Respin holds winning symbols in position as the reels respin.

Anytime there are three or more scatters present punters will be presented with a choice of four artifacts representing the modes.

In Colossal spins, the round begins with an x2 roaming wild on reels 2 to 5. Collecting additional scatter symbols upgrades the multiplier up to a mouth-watering x625.

The Wild Strom brings with it a special area called Wild Zone where any symbol can be transformed into a wild.

If you thought that x625 is a lot for a multiplier Rise of Olympus will blow you away because each wild in view increases the unlimited win multiplier!

And finally, the Almighty mode offers wilds which begin as x2 and x3 but can go all the way up to x81.

The developer is known for using Megaways in its games to spice up the proceedings, as they did in their previous release, Tiki Treasures, which combined the Jackpot King progressive jackpot with the Megaways mechanic offering a whole 117,649 ways to win.

They are a UK-based game studio and a part of Germany’s Gauselmann Group. The company creates exciting games for the global online and mobile igaming industry and their games are available on over 100,000 land-based terminals across the UK, Germany, and Italy.