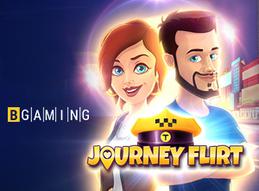 Game developer, BGaming, is shaking things up with their newest release, a slot game based on a love story. A traveling love story taking place across the globe and in four famous cities.

It’s all about a pair of globetrotting lovers riding around in a taxi while visiting some of the hottest destinations in the world – Havana, Mexico, New York, and London.

The developer known for games such as West Town, Platinum Lightning, and Mechanical Orange is calling this new creation Journey Flirt, a celebration of wanderlust and true love.

The game is presented in a unique comic book illustration style with the two romantic leads serving as the wild symbols and the different types of taxi vehicles being high paying. The low paying roles are once again filled by the trusty card numbers styled here to look like traffic signs.

In the background are all the four different cities with their landmarks scrolling along as the game goes on to simulate the journey.

Any game that’s about spanning the globe…

…would have to have some interesting features and the developer BGaming has definitely delivered.

The main feature of the game is changing extra spin modes depending on the city the player selects. Each location gives its own twist on the beloved mode once the three scatter taxi signs appear on the reels.

In London, it’s all about expanding wilds which occur when the pair of travelers appear next to each other and is part of a winning line. The two symbols will expand to cover the reels thus covering a total of six cells to increase the chances of another winning combination occurring.

As for the land of tequila and mariachi, the Mexico extra spins see the wilds become sticky if they’re a part of a win. They’re held in place for the next spin making it easier for another win to happen.

The journey continues in…

…the capital of salsa dancing, Havana. Here it’s all about the multipliers which are fixed and applied to every winning combination.

The journey’s end finds the couple in one of the biggest cities in the world – New York. Here the multipliers, like the city itself, are flexible and ever-changing. The wilds bear the number and if they’re part of a win line the win is multiplied.

In addition to these features…

…the game also has a respin mechanic happening in the base game any time the two wilds are together and part of a win they will stay in place for a quick respin.

The makers of this 5x3 game with 243 win lines are BGaming whose story begins in 2012 with the foundation of SoftSwiss a company known for providing casino content and platforms. Then in 2018, they rebranded their proprietary in-house game offerings and thus this developer was born.

Their games are known for being mobile-friendly, featuring crisp HD graphics and the company prides itself on their provably fair cryptographic technology which makes it easy to confirm their games are fair.