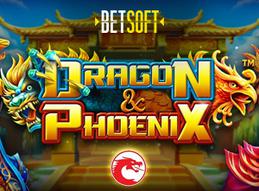 Game developer and casino content supplier, Betsoft, is jumping on the Asian train with their newest release Dragon & Phoenix.

It’s a lucrative realm filled to the brim with riches. Punters will need to seek out the Royal Couple and the Money Tree symbols to guide them on the road to big wins.

It’s a 5x3 video slot in which wealth and prosperity are just around the corner because the royal couple can appear and expand to cover the entire reel thus drastically increasing the odds of a win.

Those who are willing to start exploring the mysteries of the royal court can expect wins up to 8000x of their original bet.

This game all about royalty and opulence and is filled with Chinese symbols of prosperity such as the Money Tree, and the number 88 which appears as a middle-value symbol. The number has connotations of wealth in Chinese culture because it sounds similar to the Mandarin and Cantonese words for wealth.

And in order to attain this wealth, punters will need help in the form of the special features that are present in this slot.

Firstly, there are the expanding wilds which appear on reels 2,3,4, and 5. They will substitute for any symbol except the money tree scatter.

The money tree has a double use in the game as it gives players a scatter win (up to 500x for 15 symbols) and also triggers a cascade where new symbols fall in their place for a chance at yet another win.

…the scatters also activate the extra spin mode. After the scatter win is paid out and the new symbols fall down the punters get 15 extra spins in which to chase the royal riches.

For those who want to go all the way and have a strong gambling spirit the title also offers the option to gamble any standard win in a double or nothing coin toss minigame.

With 20 lines and an RTP of 96%, this offering is joining the recent surge of Asian-themed video slots such as NetEnt’s Who’s the Bride and Microgaming’s Long Mu Fortunes.

Founded in 2006, the game developer has earned the reputation of one of the world’s premier producers of high-end igaming products. The company prides itself on providing an unparalleled level of service backed by a team of experienced account managers, engineers, software designers, game designers, graphic artists and 3D animators, and marketing specialists.

In addition to their games, Betsoft also offers a full-featured casino management platform. The company has certifications and licenses in many igaming markets and is currently offering its services to many operators in Europe and the Americas.

They have also recently extended the partnership with Russian operator Leonbets which will allow the company to further conquer this lucrative market.