Step Up, Step Up and Witness the Wild Circus – the New Slot Game by SYNOT Games 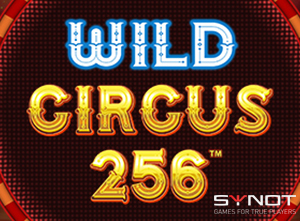 Have you heard the exciting news? The circus is coming to town! It’s a troupe of juicy performers with magnificent tricks and spectacular winnings up to their sleeve.

So goes the announcement for SYNOT’s new circus-themed slot game, Wild Circus, a four-reel four column game with 256 paylines and a host of special features.

Inside the circus tent, players can expect classic fruity goodness with bells and lucky 7s as well as a mystery symbol that will pay out up to 100x bet if 3 or 4 appear scattered on the reels.

“The most unique feature of this game is the Circus Wheel, used for the very first time in our slots. The players will surely love the anticipation of the random selection of Wilds and the game’s joyful vibe,” says Matej Sopóci, Chief Product Officer at SYNOT Games.

Inside a circus tent is where this game takes place and it’s decked out in fairy lights and colorful balloons. It’s a bright and cheerful scene, sure to remind you of those carefree evenings when the circus came to town.

And just like in a circus, the fun and excitement don’t stop in this game because…

Any symbol on the reels can become wild!

How is this possible? It’s the Wild Circus Wheel features that spins along with the standard reels. On every spin, it will turn one standard symbol into a wild symbol.

Instead of a preset wild symbol, players get the excitement of never knowing how a spin will shake out.

And with a max bet of 100 euros, a gamble option, and a random jackpot paid out by the mystery scatter, there’s enough here to satisfy even the most hardcore of punters.

The announcement of a new slot comes after a very busy couple of months for the team at SYNOT.

First, the company released Harlequin Dice last month, another fresh take on classic games inspired by the world of the performing arts. 81 ways to win a game that eschews traditional win lines and packs a mighty feature – all spins in the extra game are guaranteed winners!

Then last week the developer has announced the acquiring certifications for entry into the Danish And Portuguese market letting them pursue their goal of extending their reach into regulated and hugely lucrative European markets.

The company is part of the SYNOT Group, an international structure of companies operating in more than twenty countries. The core business is gaming and supplying cutting edge technology, games, and solutions. A full product suite for both online and land-based casino entertainment.

It creates original slots with remarkable visuals and maximum playability.