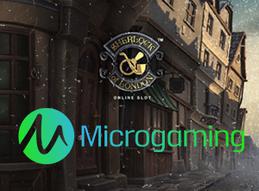 It’s time to don the famous deerstalker and tweed jacket and roam the gloomy streets of London looking for clues and villains.

One of the most popular characters in history, and the star of the first detective novel ever written, Sherlock Holmes is back yet again in Sherlock of London from Microgaming.

Developed exclusively by Rabcat, the powerhouse team behind classic games like Castle Builder II and Crystal Rift it offers players an escape into the smoggy alleys of Victorian London, as well as a chance to get some serious wins with all the exciting special features.

It’s a five-by-three game with 25 paylines.

Commenting on the features and theme of the new game, James Buchanan, the Director of Global Operations at Microgaming:

“Sherlock of London™ provides a slot experience with wild features that heighten the action in both the base game and free spins. The mysterious atmosphere and thrilling adventures are well represented here, with excellent artwork and an evocative soundtrack.”

Adding to the praise for the game, Thomas Schleischitz – CEO of Rabcat said:

“We are delighted to bring Sherlock of London™ to Microgaming’s award-winning portfolio. Our team has had a brilliant time pulling together the murky, fog-filled world of criminal rogues and sleuthing geniuses, and we are confident that players will have as much fun exploring the game as we’ve had to create it.”

On their journey through a stunning London cityscape, the daring duo Holmes and Watson will be assisted by an entire line up of wilds and some punter-favorite extra spins.

…they don’t just stand in for other symbols!

If two or more wilds spawn on non-adjacent reels they will turn all symbols between them into new wilds, thus creating a chance for new winning combinations.

Double wins happen when two wilds appear next to each other. They will then form a double wild and award an x2 multiplier to all wins from that spin.

And that’s Still Not All:

Land just one wild on the first or second reels and one or two respins will be triggered while the triggering wild remains sticky i.e. fixed in place.

But the ante is truly upped during the extra spin round when Holmes and Watson scour the streets of London in search of a hardened criminal group on the lam.

There to help them are expanding and extra wilds, making the chase and the win potential even wilder.

The company is an award-winning gaming software supplier to leading operators worldwide.

Microgaming is credited as developing the first truly online casino software in 1994 and the first mobile casino in 2004. Their products include casino games, poker, bingo, sportsbook, land-based and live dealer.

They set themselves apart with branded blockbuster themed games like Jurassic Park and Game of Thrones and the biggest progressive jackpot network in the world.