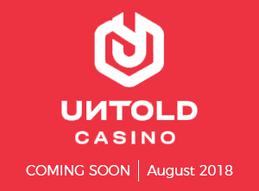 Players from all over the world love to hear about when a new online casino brand is going to launch because it means they have yet another chance at a strong option to pick from. More competition means better casinos, better promotions, better customer service and faster withdrawal options in the long run. Coming up in August 2018, a new brand going by the name Untold Casino will be launching, and it's looking like players will have a lot to look forward to with them.

About This Upcoming Brand

A few key things that players look for in a new casino are where it's licensed, which banking options are available and which jurisdictions it's available in. This new site will have licenses from both Malta and the United Kingdom, and they'll have an extensive selection of all of the banking options that you might want, including both credit cards and electronic methods. While they're going to focus on European countries, they'll also be available in Canada and many other areas.

The key thing that players should know about the Finnplay software platform that they'll be using is that it's a software aggregator platform that hosts titles from some of the most popular names in the business. This includes big names like Net Entertainment, Endorphina, iSoftBet, BetSoft, Microgaming Quickfire and tons of others. Players are going to have several hundred titles to pick from, and this will also include live dealer games from Evolution Gaming, a company widely regarded as the best provider of live dealer games that is running today.

So far, what you'll be able to expect from the upcoming Untold Casino is that they'll give players a whole lot of games from some of the best providers available along with a whole lot of different banking solutions. They'll also be held accountable by their licenses in the United Kingdom and Malta, and that will give players quite a bit of peace of mind for their cash and for the fairness of the games, both of which are extremely important parts of being able to enjoy playing somewhere.

Overall, it'll be a few months before they launch, but they look like they're already going to be doing plenty right.