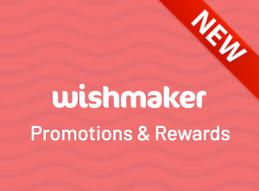 The newest online casino to see a launch is Wishmaker Casino, and it's looking like they're going to have a lot for players to get excited about. They're licensed in some pretty well-respected jurisdictions like the United Kingdom, Malta and Sweden. On top of that, they have a great selection of titles along with a big promotion that's different than anything we've seen before.

Right out of the gate, this site is going to offer players a tremendous selection of top-level games. This includes the full suite of games from names like Net Entertainment, Thunderkick, Yggdrasil, Quickspin and plenty of others. The point here is that all kinds of different players will be able to get in on the action with the types of games they're looking for because this site has a tremendous selection with options in every genre and sub-genre that you can imagine.

We honestly thought we had seen just about everything that could be offered as a promotion for a casino, but we haven't seen this. Players are going to have a chance, as a part of a new launch promotion that runs for a limited time, to star in an episode of the Family Guy television show. This comes along with a special VIP pass as a part of a three-day trip to tour the home of Ferrari with test drives and plenty of time in the Ferrari factory spent with some of the most beautiful and most expensive cars in the world.

The promotional machine that runs at Wishmaker Casino is called the Wish Factory. Players interact with it using Wishcoins that they are awarded for all of their real money play. You can choose a ton of different prizes from this Wish Factory promotional vehicle from real-world items to bonuses and other goodies. It's a fun way to mix things up, and when you combine it with their great game selection and the number of high-level licenses they hold, it's looking like a place players could easily call home from the time they open their doors.