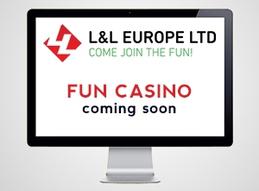 L&L Europe Ltd, purveyors of about a dozen online casinos focused on localized markets, is getting ready to launch Fun Casino in the near future. Not much is known about the casino yet other than that it will be multi-currency, multilingual, and will feature tournaments.

The Maltese company currently operates several casinos that embody a certain look and feel relative to their target markets. Properties like All Irish Casino, All British Casino, Svedala Casino, and Norskeautomater are all offered in the native language, use the local currencies, and are staffed by trained support service staff who are native so there is never a communication barrier.

Fun Casino will most likely follow in the footsteps of their highly popular Yeti Casino which is multi-currency and multilingual, appealing to a broad base of customers. The new casino is likely to be licensed by both the Malta Gaming Authority and the UK Gaming Commission and offer nearly 500 games from well-known suppliers such as NetEnt, Microgaming, and Amatic Industries.

Live Dealer Games in All Regions

The website should support English, Finnish, German, Norwegian and Swedish. If launched as expected, following their first multilingual casino model, Fun Casino will feature a wide variety of currency, deposit, and withdrawal options. The website will most likely offer live dealer games by NetEnt and Evolution Gaming. One reason to have two live gaming studios available is that NetEnt doesn't serve certain regions such as Canada on the open market, due to contracts with state monopolies. L&L Europe Ltd added Evolution Gaming live games to their casinos in August 2017. Games like Casino Hold'em, Caribbean Stud Poker, Three Card Poker, and Ultimate Texas Hold'em are now available via mobile and desktop at all of their casinos.

Fun Casino should carry Microgaming slots and other games in regulated jurisdictions where MGS is licensed. That means that Fun Casino players will have access to big progressive jackpots that are paid out in a single lump sum. A Dutch woman won nearly 2 million euros at L&L's poldercasino playing Microgaming's Major Millions online progressive slot machine in May with a bet of only 3 euros. At least four games carried on their network currently have jackpots standing at over a million euros each. The fifth, Mega Moolah has fallen three times in the last year already so it may be awhile before it reaches 1 million or more again.