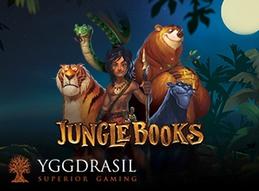 Yggdrasil Gaming is set to release a groundbreaking new slot game on September 20. Jungle Books, on its face, is simply a beautifully graphic gambling game with superior soundscapes and a narrative lifted from Rudyard Kipling's classic, The Jungle Book. But it is a lot more than that.

The Swedish game developer, first licensed in 2013, has always been an innovator abandoning the Flash sphere in 2014 to develop and deliver in HTML5 far ahead of the pack. With their September 2017 release of Jungle Books they enter new territory others can only follow or attempt to mimic.

Fusion Realms is the new game mechanic behind Jungle Books that amalgamates multiple reel structures and game features into a single title. The game has five feature characters and the new mechanic allows each of them to intermingle and traverse their own and other character's jungle realms. Each is the master of their own realm with two special game features. They can also become a guest in another realm and bring one of those features with them. All told there are 45 possible feature combinations in Jungle Books.

Characters trade off the role of host during the game and other personalities can join them at any time. When a visitor arrives they will stay in the host's realm for a minumum of 3 spins, but sometimes more, adding one of their features to the game for the duration. With change as a constant, the entire realm can shift along with the host making the current host become a guest in the new realm. This will also change the game features but a rule is applied to make sure that it is never simply a role reversal. New features will be introduced as will a new host if the former host becomes a guest in the new realm.

The Jungle Book slot game will be available at Mr Green, Guts, and VideoSlots casinos as well as dozens of other casinos where Yggdrasil games are deployed.

iSense2.0+ For All Devices

The game will be released on Yggdrasil's revamped HTML5 framework iSense2.0+ for mobile and all other devices. The new client, released this summer, allows for even faster game loading and a host of other features including a minimalistic user interface with increased functionality including single click deposits while still on the game screen. The company's already superior graphics will be even better as iSense2.0+ also supports Retina Display HD and Force Touch.