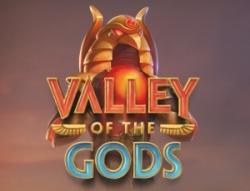 Yggdrasil Gaming recently announced that they would be unveiling a new slot game on August 24 called Valley of the Gods. The game will be presented in typical Yggdrasil high definition with an aspect ratio of 16:9 for play on desktop, tablet, and mobile devices.

As given away by the game's name, Valley of the Gods is an ancient Egypt-themed slot. While the online gaming market is literally littered with dozens of long-forgotten games using this theme - some good, some not so great - players can expect virtually any game from Yggdrasil to rise above the pack not only in visual and audio quality but in superior game features and execution.

Special Features Found in Valley of the Gods Slot

During the base game, 12 "blockers" with scarab beetle icons cover a dozen reel positions. When a winning spin is played, each winning symbol releases a golden scarab that destroys one of the blockers. When all of the blockers have been removed all of the winning golden scarabs turn blue or red and are collected for the feature game. Multipliers and extra lives are activated when all blocks are destroyed.

Players are drawn to seek immortality through the collection of extra lives in a twist typical of Yggdrasil Gaming's immersive and well-executed themes. Extra lives award re-spins on losing re-spins so that free games don't always end after a spin with the non-winning combination.

The 5x5 grid and unlimited "win ways" create 3,125 potential virtual pay lines. The game, as released, features an advertised theoretical return to player percentage (RTP) of 96.2%. The game will be released in Yggdrasil's revamped HTML client framework called iSENSE 2.0+ for both mobile and desktop. Apple devices with Retina Display and Force Touch are supported by iSENSE 2.0+ meaning the already stunning Yggdrasil graphics will be even crisper on the high-definition screens.