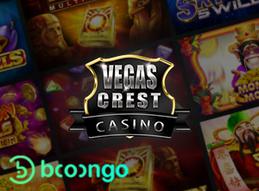 Vegas Crest Casino has announced a partnership with the content provider, Booongo Games, that will see over forty of its games become available on the casino’s platform.

This move will put Booongo’s HTML5 games into the hands of even more players and let them experience the innovative gameplay and a rich immersive atmosphere on any device they own.

The games will be exclusive to Vegas Crest in the US market.

This partnership of two relatively new players in the iGaming sector will especially benefit players in the United States by bolstering the catalog of slot and table game titles available on the market.

Vegas Crest entered the market in 2014 and since then has managed to pull players in with their unique promotions and tournaments, such as giving new player bonuses on the first seven deposits rather than just one. It also offers a VIP program for its customers.

The casino offers nearly 1000 of the biggest and best online casino games along with live bingo from the leading game providers.

Founded by Vista Gaming, a famous bingo operator, the company has sought to become a leader in the lucrative United States igaming market. Offering a mix of Western and Asian games for the maximum appeal and allowing players to bet in bitcoin has made this casino one of the best US-friendly operators.

With the addition of mobile capability in 2015, it has extended its reach into mobile markets making it possible for their players to enjoy igaming anywhere.

Booongo is a progressive game studio that creates cross-platform HD online slots for the free-to-play and online gaming markets.

They are a team of passionate slot enthusiasts with offices in Ukraine and Taiwan and headquartered in Curacao.

This announcement of a partnership with Vegas Crest comes hot off the heels of the company announcing its new slot game, Sync Reels, a classy fruit machine with a new twist on the old formula and 243 exciting paylines.

The company is known for its innovative takes on classic-style slots, such as their 777 Gems which brings the tried and true 5 line slot into the modern age.

Their spectator mode allows players to go head to head in one on one tournaments.

Booongo has also expanded into the Latin American market recently, through a partnership with BetConnections, a leading B2B content provider in the market. This partnership has seen their game catalog come to Paraguay, Peru, and Colombia which are markets with significant growth.