The Kraken Awakened by NetEnt in Ocean’s Treasure Slot 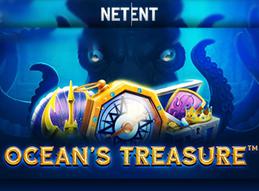 The legend of the monstrous creature that lurks in sea depths seems to be a main source of inspiration for the gaming developers in 2020. Once again, the mighty Kraken was awake, this time by NetEnt in its release Ocean’s Treasure.

This slot takes the players to the bottom of the ocean that hides many sunken treasures. The gigantic cephalopod from legends is guarding it, but the players who dare to challenge it might swim away with some nice prizes.

The developer is joining the reputable Pragmatic Play and Thunderkick who recently contributed to the online gaming market with “Release the Kraken” and “Beat the Beast: Kraken’s Lair” slots. While all of them are using the same theme and backstories, their gameplays are quite different, and each release provides a unique playing experience.

What Treasures is the Kraken Guarding?

This game is providing adventure-seekers a chance to find hidden prizes in the long-lost city of Atlantis which is in the background of the 5x3 grid. Enriched with excellent graphics and design, this is a very nice-looking slot, optimized for all devices and also available in mobile casinos.

The title includes stacked wilds, complimentary rounds and an increasing level multiplier, with a flow of exciting animations during every spin. Since it has 15 active lines, it follows into the category of standard paylines games.

Aimed at players who prefer high volatility, Ocean’s Treasure has the potential to trigger up to 102 additional rounds. Its RTP of 95.99% should be capable of delivering dynamic gameplay with a winning potential of up to 18.000 x stake! Still, these biggest prizes are reserved for players who reach level 5 of the extra spins feature and play with the 12x multiplier.

To unlock the Kraken’s treasures, players will have to collect at least three scatters. The ones that do, will enter the 5-level extra spins mode. For every wild that appears on the reels, the player will get one more complimentary spin.

With every new spin...

...a punter will go deeper into the ocean, unlocking new levels and increasing the multiplier up to twelve times.

More Exciting Releases Up Its Sleeve

The developer has big expectations for its latest release. In the words of Bryan Upton, director of games at NetEnt, it is an engaging release perfect for the players who like high-volatility games:

“Ocean Treasure’s combination of an immersive theme, striking graphics and anticipation building features is tailored to grab the attention of experienced slot fans and those in search of high-intensity during a play session. Awarding more Free Spins to lucky players than any other NetEnt game and the potential for huge prizes, this deep-sea slot will make a lucrative addition to our partners’ portfolio,” said Upton.

This quest for the treasures lost at sea is already available at many online venues along with the company’s previously rolled out releases Rise of Maya and Secret of the Stones. The brand has also announced some new and exciting titles such as Hell’s Kitchen slot that will be developed in the cooperating with the Gordon Ramsey and ITV.

Ocean Treasure’s slot mixes the theme of Atlantis with the myth of the legendary sea monster. Still, the Kraken is taking the spotlight since the extra spins round is revolving around avoiding its gruesome tentacles. The mythological creature also has a main role in Play’n GO’s title Eye of the Kraken, released in September 2015. Whether the latest deep-sea adventure by NetEnt will become more popular than this classic is yet to be seen.