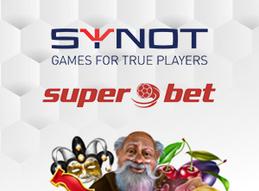 Content supplier and game developer, SYNOT Games, is gearing up to enter the regulated Romanian market by signing a deal with one of the biggest players in the casino market in the Eastern European country.

The player in question is Superbet, who offers various online casino games to punters in Romania.

These same players will now be able to enjoy some of the developer’s best slot games like Respin Joker, Fruit Awards, and Alchemist’s Gold.

“We are happy to support Superbet’s offering with a list of fresh and entertaining titles with a proven record on the market. This deal highlights our increasing popularity and market presence, giving us further recognition on the regulated markets. “

Commenting for Superbet, Heather Faulkner, Head of Online Gaming, shared the enthusiasm of the company regarding SYNOT’s portfolio and pointed out their players “will certainly be delighted.”

“We are confident that this will be a long-lasting relationship given the reputation that this provider has earned itself over the last few months”, she concluded.

Superbet has worked with other content suppliers who are eager to enter the Romanian market. Famous developer Playson has also entered into an agreement with the operator which will see its portfolio go live in Romania.

The developer has been trying to extend itself into the regulated European market and this past July, they succeeded in obtaining two very important licenses for two very lucrative markets.

Danish and Portuguese gambling authorities awarded the developer certifications that will let begin operation on these highly lucrative and recently regulated markets.

Denmark especially has been seeing record revenues in the third quarter of 2018 which is a signal to the iGaming industry about the potential of this Nordic market.

When it comes to Portugal, the company has secured an arrangement with Nossa Aposta, a brand of Aspire Global. The deal will see 8 of the developer’s best games reach Portuguese punters with more on the way.

Being a developer isn’t all agreements and certifications…

…and the company has made sure to keep up their release schedule with new games.

In July, they unveiled Wild Circus 265 in which the circus comes to down to deliver 256 paylines and a lot of special features.

The innovative Wild Wheel spins along with the normal reels and changes the Wild every time. Any symbol can turn wild so each spin is exciting and unpredictable.

The studio’s newest project is Jewels Fortune which is a game with 243 ways to win, avalanche respins and multipliers.

A part of SYNOT Group, an international structure of companies operating in more than 20 countries, the development studio has a focus on supplying cutting edge technology, games, and iGaming solutions.