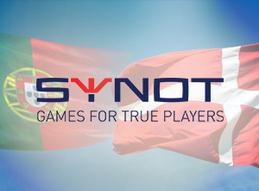 Online casino content supplier, SYNOT Games, has announced over the last couple of days that it has gotten licenses for two new markets that will enable them to expand their market shares in new regulated territories.

The jurisdictions in question are Denmark and Portugal where SYNOT will be extending their market footprint with their catalog of over 40 games which are available in 24 languages and currently rolled out to more than 70 casinos.

In a press release issued on Tuesday, the casino supplier has announced that it has acquired a license from the Danish Gambling Authority which will allow them to debut in Denmark through existing and new operators.

Denmark is attractive to providers like SYNOT because of its thriving igaming market which has seen record revenue in the third quarter of 2018.

Commenting on the expansion into the Danish market, Ivan Kodaj the CEO at SYNOT, remarked: “We’re happy to strengthen our market position in Scandinavia. We see great potential on the soaring Danish market and are excited to add another flag on our success map. “

On the following Wednesday, there were new reports of the developer acquiring another major certification, this time for the Portuguese market. By partnering with leading operators…

…they will expand its market presence.

The European nation’s market is relatively young, being launched only as recently as 2017. However, the revenues for last year were an amazing 152.1 million euros…

…a significant growth compared to the year before.

Kodaj again stresses the importance of the expansion and their desire to further their focus on expansion into regulated markets. He said, “we believe that our diverse portfolio will prove to be highly popular among Portuguese players.”

Extending the Footprint in European Markets:

The news of newly acquired licenses comes shortly after the company has announced partnerships with NetBet and 777 focused on integrating its content into the operations of the online gaming brands.

All these moves indicate clearly the developer’s intention to strengthen its position on the European markets that have been seeing revenue growth recently.

A team of iGaming enthusiasts, keeping in touch with innovation and striving for perfection, an established content supplier with a growing market presence and licensed by the Malta Gaming Authority and in markets across Europe.

Their comprehensive portfolio boasts over 40 titles like 81st Cabaret which are available in 24 languages and in over 70 casinos.