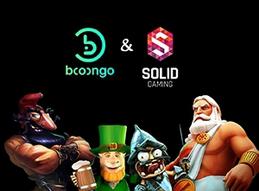 B2B game aggregator, Solid Gaming has recently announced a partnership with Booongo, primarily for the Asian market. The partnership makes it possible for the entire portfolio of Booongo's HTML5 games to become available in the region through key operators such as Vera & John Asia and others.

Solid Gaming seeks out quality partners and this deal adds to their presence through unique content in 2D and 3D for instant delivery over mobile and other devices. Booongo titles such as 88 Wild Dragon, Fruiterra Fortune, and Kailash Mystery feature stable operation, exciting features, and a rich atmosphere for players.

Other leading developers on the aggregator's platform include Booming Games, Tom Horn Gaming, and Oryx Gaming to name a few.

Booongo develops games for the free play and the online gambling markets. Their current portfolio contains 20 premium games - five of which are upcoming with today's release of Wild Galaxy. Solid Gaming pride themselves in delivering unique content with interesting and captivating mechanics.

Solid Gaming, News, Solid Gaming and Booongo partnering up for the Asian market 09-28-2017