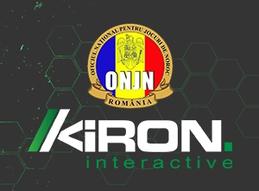 The license grantor, ONJN regulates all forms of gambling in the country since Romania announced in 2015 that the country's online and on land gambling laws would be reformed.

In an announcement on the company's website, Steven Spartinos, CEO of Kiron, said: “We are thrilled to have been awarded a permanent licence by the regulator, and it is fantastic news that our suite of virtual sports and number games will now be available to Romanian customers.

“Gaining this licence underlines our immense progress as the industry’s leading provider of virtual products, and we are excited to develop our product line in the country’s regulated market.”

Kiron, who currently have 20 games in their portfolio, is one of the first virtual sports game developers and providers to be approved by the regulatory body. Some of their games can currently be found at Ladbrokes and Dafabet among others.

Kiron Interactive was established in 2001 and delivers their products globally over the internet, mobile, satellite broadcast, and WAN/LAN networked environments, as well as gaming machines in retail locations. According to the company's website: "Using the latest animation and proven gaming systems, Kiron’s solutions have grown to be the leaders in their field."