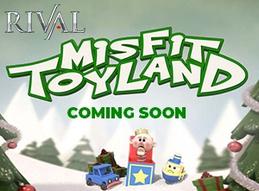 Rival will be making their mark on the Holiday Season with a December 11, 2017, release of Misfit Toyland. We don't have access to the datasheet yet, nor the paytable, but Superior Casino was kind enough to let us know about some of the video slot's features. Rival has a demo page up for the game, but we're too early for a sneak peek.

We do know that it will run in the Rival Powered V4 Lobby with lightweight Shockwave Flash loaders. For players, this means the game will run fast with no lag on most devices. For operators, it means that the download and no download casino lobbies will finally share a single common lobby file. The chat software has also been upgraded, and all new games will be staged at a maximum resolution of 1024 x 768 for desktop and optimized for mobile at 320-px. The most important thing for players is that the new lobby is more stable so restarts and re-downloads will be minimized.

Now, for the game itself. The layout will be standard with 5 reels and three positions each. Although we don't have that image yet, the maths tell us that is the only option as the game will have 243 ways to win, rather than standard pay lines. Three or more matching symbols from leftmost to right on adjacent reels pay, no matter what their positions are on the reels.

Do you miss a toy you got for Christmas as a child and just sort of cast it off and lost track of it? Well, all the discarded toys from Christmases past now have a home along with their misfit peers. Those toys have all gone to Misfit Toyland! The good news is that Santa and Mrs. Clause visit every Christmas Eve and collect toys for children who will be glad to have them.

There's a bubble blowing wand with a square hole, a basketball shaped like a cube, a cowboy has been mismatched with a pig to ride instead of a horse, and for some reason... nobody wanted to play with an action figure depicting a businessman in a green suit - misfits one and all, as are the ragged doll and the jack-in-the-box who simply will not smile.

However, Jack is likely to make players smile as he expands to fill his reels with wild symbols during regular gameplay. And when you see three Santa icons you have triggered a free spin bonus and can pick a toy to play with during the feature. If you choose the sinking ship wilds will expand downward from the symbol. Choose the broken truck for sticky wilds or the jack-in-the-box with expanding wilds. The game should be available at all Rival Powered casinos along with all other Rival slots next week.