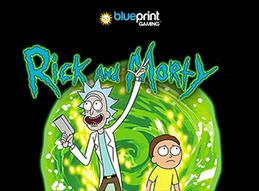 Megaways™ slot. Blueprint Gaming is bringing the misadventures of Rick and Morty into the reels for the joy of all the show’s fans.

This controversial show acclaimed by critics for its originality, humor, and creativity...

...has been the inspiration to many video games, comics, music and many other releases. Now it is getting its place in the iGaming industry as a slot machine.

The homage to the animated series was created as a result of partnership between one of the leading-UK-based game studios and part of Germany’s Gauselmann Group, Blueprint, Adult Swim and Warner Bros. By equipping the game with excellent art and a whole universe of challenging features, the developer is promising an out of this world adventure.

“Wubba Lubba Dub-Dub! We’ve brought the hugely popular Rick and Morty™ to the reels for a trippy gaming experience packed full of cascades and bonus features. We have a strong reputation for delivering engaging branded games that bring films and TV shows to life and our design and development team have once again delivered with an out of this world slot.”

A Glance at the Features

The lovable sociopathic genius scientist and his inherently timid grandson are going on another adventure through dimensions and universe, this time set on the 6 reels with 2-7 rows on each.

Since this is a Megaways slot...

...like other releases that use this line system, this one also comes with a power to generate up to 117,649 paylines per spin.

To make things even more interesting, every win during the base gameplay triggers a cascade, making more room for punters to secure entry to one of extra spins rounds:

…this release comes with excellent graphics and animation. Due to HTML5 technology that the developer uses for creating its slots, this title is available for both desktop and mobile devices cross the UK and European gaming markets.

“Strongest ever launch in the first week” for Blueprint

The launch of this branded title has broken the company's records in the first week across plays, stakes and users. With the highest single-day figures for plays, the game broke the previous record set by The Goonies for 37%.

“The interest around the game before the release was tremendous, and the positive response post-launch has been overwhelming, with operators and players alike enjoying the feature-rich gameplay.

It’s become Blueprint’s strongest ever launch in the first week, breaking records across plays, stakes and users. The game enjoyed the highest single day figure for plays, an increase of 37% on the previous record set by The Goonies.

We’re really proud of Rick and Morty Megaways. The positive reception to the game from the industry suggests that our highly skilled team has created a trippy gaming experience that has captured the interest of players worldwide.”

Purvis also revealed that players can expect more exciting games from Blueprint Gaming partnership with Warner Bros. She said that in the months ahead, the brand will continue to develop games in the collaboration with this esteemed film studio.

By her words, the company is currently working with other IP license holders to transform their brands into high-quality slot games. Purvis has also disclosed what title will be joining soon in the category of branded new slots:

“Our next branded title, which is scheduled for release later this month is based on the hilarious film Sausage Party, which will see players head to Shopwell’s supermarket and follow the antics of Frank and his buddies as he aims to discover The Great Beyond” commented Parvis.