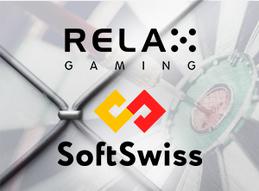 Game developer and content aggregator, Relax Gaming (RG), has announced a partnership with the operator, SoftSwiss.

This new partnership will see the aggregator, who through their “Powered by” and “Silver Bullet” schemes has amassed more than 20 studio collaborators and countless games, supply SoftSwiss with said games in an easy and simple way.

The operator will now have access to high-performing titles from their content partners such as Money Train and Temple Tumble.

“SoftSwiss’ efficiency, quality, and precision made the company an ideal addition to Relax’s rapidly expanding distribution network as it looks to continue the transformation of B2B content delivery.

“Our impressive portfolio of varied volatilities, styles, and themes of slot games will undoubtedly complement its casino offering and we look forward to working with SoftSwiss’ experienced team to provide an unrivaled range of titles to its customers.”

At SoftSwiss, Max Trafimovich, the company’s CCO added that the content aggregator has “found partners among the most famous brands in the industry” and how the operator is “delighted to join their ranks through this collaboration.”

According to Mr. Trafimovich…

…the agreement “marks another significant step in the right direction for our business and will help develop our gaming product lines to take the online casino experience to the next level.”

The last few months have been full of important events for both companies.

For SoftSwiss, the biggest change…

…was changing their old logo and embracing the company’s future. According to representatives, the new logo was chosen to represent the evolution of the firm into a true multi-vertical player on the market.

On the Relax side…

…the company has slowly been adding more and partners to its Powered by and Silver Bullet programs thus maintaining the growth momentum they had this year.

In August, they have added two new names to their roster of studios and partners.

These are Revolver Gaming who will bring over their fan-favorite games including Multiplier Man, Fast and Sexy, and the upcoming Neon Blaze and Squish.

The other is the recently rebranded ReelPlay (formerly Chance Interactive) who were signed on the Silver Bullet program which allows smaller development studios to access RG’s vast network of clients.

The studio will bring with itself many high-quality titles such as Buster Hammer Carnival and Lolly Land.

RG was founded in 2010 in Malta, with the vision of pushing the boundaries of gambling with modern and innovative technology. Since its inception, the company has broadened its offerings into different product verticals which have made them one of the major iGaming suppliers in Europe.

It holds licenses in several European jurisdictions and are present in many regulated markets such as Alderney, Malta, UK, and Romania.

SoftSwiss was launched in 2008 to develop online auction software. Since then, it has grown to a large scale and has implemented a large number of successful IT projects for the iGaming industry. Headquartered in Curacao, it develops software in Belarus.