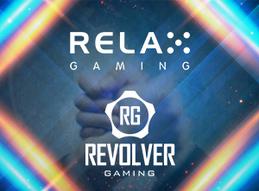 Relax Gaming, the content provider and distribution platform holder, has signed a new platform-to-platform agreement, adding Revolver Gaming to its Powered By program.

The program is a series of agreements the content provider has made with developers and platform holders to integrate their games into its offering, thus extending the reach of partner companies to all operators and markets where Relax does business.

Revolver Gaming is the latest to join the roster that already includes Green Jade Games, Electric Elephant, and Skywind Group.

The deal will see fan-favorite games from the developer such as flagship Multiplier Man, Fast and Sexy and the upcoming Neon Blaze and Squish go live on the content distributor’s platform and launch on partner operator’s casinos.

Speaking on the agreement, Simon Hammon, Relax Gaming CPO, stated the company is thrilled to add the developer to its Powered By partnership base. He also added that Revolver is “building a strong reputation for quality and innovation and is a natural complement to our offering.”

Revolver CEO, Ryan Lazarus, relayed the company’s excitement to be a part of the platform while adding that the developer has “some great concepts in the pipeline” that they are looking forward to sharing.

In recent months, Relax has grown its platform…

…by signing up with some of the best and most exciting new and old developers in the iGaming market.

In April of this year, they entered into a partnership with Electric Elephant, and later that month with the up-and-coming developer Green Jade Games, the creators of innovative slot game, Hammer of Fortune.

And then in June, Skywind Group joined in bringing over some of their popular games like Panda vs Goat and Double Jungle.

During all these partnership talks and signings, Relax didn’t forget its developer duties either.

The 5x4, 40-payline slot takes players on a journey through lawless lands where the wins can go as far as 20,000 times the original bet.

Mr. Hammon commented on the game's release: “Our in-house game content is going from strength to strength and Money Train is set to propel that momentum by offering our partners’ customers immersive gameplay which drives retention and engagement rates.”

The platform holder and game developer have established itself as one of the go-to suppliers while boasting a catalog of over 570 games.

Founded in 2010 in Malta it has quickly become one of the major suppliers in Europe across many different verticals. The company is licensed in many regulated markets including Alderney, Malta, UK, and Romania.

Through its Silver Bullet and Powered By programs the company offers content from selected studios and platform holders bolstering its in-house development offerings with poker, bingo, casino, and slots.