Relax Gaming Adds ReelPlay to the Powered By Roster 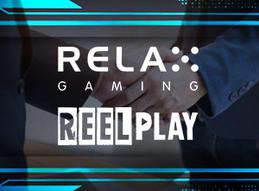 Game developer and innovative content aggregator, Relax Gaming (RG), has announced recently they will be adding another developer to their Powered By partnership program.

The Powered By program is a series of partnerships that Relax has made with other platform holders and developers where they integrate their portfolios into the company’s platform for mutual benefit.

…vastly expand the catalog of games the company can offer to its operator partners.

Relax Gaming also runs another scheme called, “Silver Bullet,” where they sign with up-and-coming studios to promote their work.

Under the terms of the deal, the content aggregators platform will become richer with many high-quality ReelPlay offerings such as Buster Hammer Carnival and Lolly Land.

Simon Hammon, RG CPO, has commented on the partnership saying that “Reel Play is an exciting proposition for the company, not only providing content that is sure to be attractive to operators but also offering a foundation of many years’ experience.”

…that the company will “undoubtedly benefit” from the developers “exciting new content.”

“Growing our distribution network with flexible, scalable platform partners is a core priority for ReelPlay. This agreement with Relax more than fits the bill, giving us access to an effective and well-serviced distribution channel. I am sure our games will be a big hit with operators and players alike.”

Increasing the Powered By Power

The developer has signed deals with many developers recently as a means of growing their platform even further.

Last week, it was Revolver Gaming that joined the fray bringing over its fan-favorite games like Multiplier Man and Fast and Sexy.

The content aggregator also has deals with the up-and-comers, Green Jade Games and Electric Elephant, and the already established Skywind Group.

Rebranding for a Better Future

If the name ReelPlay sounds new, that’s because it used to be Chance Interactive and the company decided to change it.

Under the new name, the company still develops slot games and supplies operators with fresh and fun content made by experienced gaming professionals.

It also collaborates with other developers on game maths, game building, and other services that less experienced studious need to bring their game idea to fruition.

RG has established itself as one of the best suppliers by offering a catalog of more than 570 games.

It was founded in 2010 in Malta and quickly rose to become one of the biggest suppliers in Europe. The company is licensed in many regulated markets including Alderney, Malta, UK, Romania, and others.

In addition to serving a supplier and content platform aggregator, they also develop their own games.