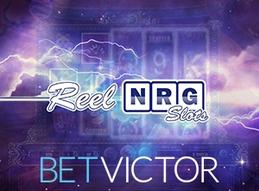 Casino game developer ReelNRG, in association with content aggregator GAMEIOM, has signed an agreement to begin integrating its portfolio of unique games into one of the biggest online betting sites, BetVictor.

The landmark agreement was announced Monday, October 26 the deal will begin with two of the London-based company's most popular games going live - Goddess of Asia and Shanghai Respin. The games will debut in Asian markets before being rolled out to BetVictor customers in the UK and the rest of Europe later this year.  ReelNRG's agreement with the company, founded by William Chandler in 1946, allows for deployment of more games from their growing portfolio in the future.

ReelNRG co-founder and CEO, Calvin Kent said of the development: "We are really excited to have signed a deal to integrate our leading slot titles with an operator as large and respected as BetVictor. This partnership underlines the progress we have made and our commitment to ongoing expansion across the globe.

"Delivering a unique and immersive online casino experience is a priority for ReelNRG, and we look forward to working closely with BetVictor as we continue to grow our reach."

ReelNRG was founded in 2015 by Kent and Amit Majumdar with offices in the UK and India. The company's games are said to focus on engaging players with a stunning audiovisual experience in each game. Kent was a contract developer and senior gaming consultant for Evolution Gaming in 2011 when they launched Mermaid's Fortune - the world's first "live dealer" community slot game. Whenever the bonus round was triggered all players were connected to a live video feed featuring a live mermaid who spun a wheel allowing participants to play out their accumulated jackpot bonuses.

Shanghai Riches is an Asian-themed slot with 30 pay lines, wild multipliers, sticky wilds, laughing Buddhas that trigger free spins, and a respin feature. Any player action, such as spinning the reels, electrifies the perimeter of the reels, and features like the Shanghai Respin or anticipation of a third scatter, electrify individual reels. Along with game announcements and stunning sound effects, the game can be both immersive and exciting.  Even small wins are given an unobtrusive, yet visually pleasing win celebration of colorful stars exploding like fireworks. On small wins, the event lasts about one-second.

The games will be available at BetVictor and on the BetVictor mobile casino.

GAMEIOM is an Isle of Mann platform provider and game content aggregator with a bespoke remote gaming server licensed by the UKGC and the GRA of Gibraltar.

Square in the Air, Press Release, ReelNRG partners with BetVictor 10-16-2017