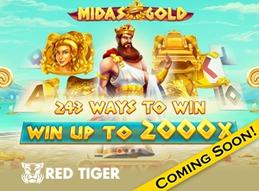 Red Tiger Gaming, licensed in the UK and the Isle of Man, has announced a release date for another blockbuster online casino slot in 31 languages. Midas Gold is a highly volatile game with a medium hit rate that VIP players will find most to their liking.  Of course, low-rollers can always give it a spin hoping to catch a lucky round or streak, but it is not the sort of game you can play all night on a small deposit.

Look for Midas Gold at VideoSlots, Crazy Vegas, Rizk, or Cashmio Casino on January 29, 2017. The HTML5 game will be available for desktop, tablets, and smartphones in all regulated markets.

A quick look at the game maths tells us why this game is so volatile, and why it will be so attractive to players who prefer high risk and high rewards. The top prize is 1944x stake!

Rather than betting on traditional pay lines, the game uses the 243 ways to win configuration - this simply means that symbols located anywhere on adjacent reels automatically match from leftmost to right for a win. But we need to get into the mechanics and features to see how this plays out for the rare but juicy big hits.

Whenever the King Midas symbol appears it will trigger the Midas Touch feature. The king will reach out and touch a random symbol and turn all matching symbols golden. They are locked in place for a respin round that keeps going as long as new golden symbols appear. If Midas appears again during a respin he'll pick a new symbol of higher value and all existing locked symbols will turn into that one. Fill the screen with the golden throne, the golden cup, the golden ring - or better yet, his daughter Zoe for the really big wins.

While the official release date is not until January 29, you can still get your hands on some their newer games by visiting the casino early and be first in line if Midas Gold gets an exclusive early release at Paddy Power or SlotsMillion. See Games and Casino reviews for the best of Red Tiger Gaming slots.