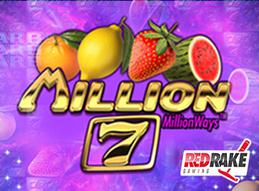 Styled after the ever-popular classic fruit machines, this release will thrill players not only with its massive number of pay lines but also the frenzy inducing special features.

Punters can expect the well-known extra spins, but also…

Red Rake has created a game jam-packed with features and interesting gameplay mechanics. Presented with style reminiscent of old fruit machines, it would be easy to mistake this offering for just one big nostalgia trip.

But nothing could be further from the truth, because once the features start rolling, it’s an electrifying and bold experience.

The bonuses start with the money collect feature. If three or more banknotes appear on the reels, then all the empty fields on the board will spin to reveal additional money stacks. Some of them are x2 multipliers that increase the entire win amount.

Then we get to the golden M symbol…

…which launches the Frenzy mode!

Frenzy mode turns the middle two reels into a special reel full of instant prize symbols. Punters can get multipliers, extra spins, or gain entry into the Frenzy 7s mini-game. The mini-game is a pick game where punters reveal prizes on board until they hit a duplicate symbol.

The silver M respin activates when the silver M icon appears. The symbol remains fixed on the reel and is turned into a wild while all the other reels spin again.

This game also brings back a tradition not often seen in modern slot releases, and that’s the scatter symbol which actually pays out money. Get three to five golden 7s and win to x200 the initial stake. There is also a silver seven that pays up to x100.

Finally, the extra spins are extra cool because of the guaranteed wild and scatter symbols on the reels at all times.

The announcement of this new slot comes after Red Rake revealed a partnership with Casino Portugal that lets it expand further into the lucrative Portuguese iGaming market.

The company is a group of more than 40 talented people that have been making casino games since 2011. Beginning its operation as a social casino, the company pivoted to real money gaming in 2015 and then in 2016 became a true B2B casino content supplier.

It is known for its feature-rich games such as the recently released, The Adventures of Ali Baba, which takes inspiration from the popular Arabian nights' story while delivering fun and engaging gameplay.

As a company with a lot of experience in the social space, RRG provides their casino partners with the necessary tools to run a smooth and efficient operation when it comes to bonuses, social engagement, and back-office integration.