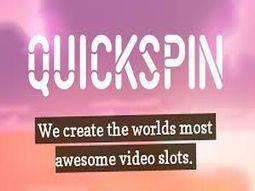 New online slots are coming out all the time, but it's somewhat rare that new games come out that break the traditional mold of what you expect video slots to be like. Quickspin's new Hidden Valley slot is a good example of a game that doesn't look like the rest, even starting with its initial layout. You'll have five reels of symbols, but three symbols show on the first and last reels. On the middle three reels, you'll get four symbols apiece. This lends itself to very atypical gameplay from what you normally find in these games.

This game centers around the story of the land of Shangri-La, a utopian setting with travelers in Tibet who have found a perfect valley untouched by society up in the middle of the Himalayas. It's an interesting backdrop for an online slot, and this scene is brought to life with great graphics and smooth animations that give a very strong visual appeal to the game overall.

Lots of symbols show up stacked in this game, and that causes you to have plenty of chances to nail multi-line wins on the same spin. The wilds show up stacked as well, and you can get multipliers on those wilds based on the size of a side bet that you place on the right-hand side. Larger stakes mean larger multipliers and chances for larger wins. You can also nail a free spins bonus feature where you'll add extra wilds by choosing normal symbols and having them act as wild during your free spins. You can earn up to 12 free turns at a time.

The Quickspin online casino software is marked by a very distinct graphical style. They get a fair amount of high ratings across the online casino industry for their high-quality games like Supernova, Treasure Island and Big Bad Wolf. They seem to have a thing for fairy tale and traditional story motifs, and you'll find a lot of their games have these types of themes instead of using popular brands from media like books, television and film. Overall, they prefer to rely on great gameplay instead of flashy graphics to make players enjoy their titles, and it's a good fit.