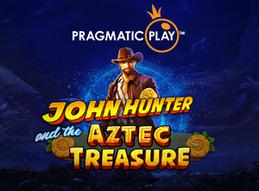 Game developer and casino content supplier, Pragmatic Play, has announced the return of one of their most beloved characters.

Coming back from his search for the secrets of Leonardo da Vinci, John Hunter prepares for a trip to the jungle in John Hunter and the Aztec Treasure.

The sequel to the popular Da Vinci’s Treasure game finds Hunter locked into mortal combat with the deadly inhabitants of the jungle protecting an ancient temple.

The intrepid hero will have to traverse a 5x6 game board with up to 7776 ways to win and brave high volatility on the journey to the golden treasure trove of the temple.

Pragmatic Play promises a game with an immersive presentation, a moving backdrop, and detailed ruins, all accompanied by an evocative soundtrack.

“We are delighted to release our newest John Hunter adventure, where everyone’s favourite hero battles through the jungle to gain untold riches.

John Hunter and the Aztec Treasure contains a thrilling bonus round, and with its huge win potential we look forward to players getting their hands on ancient trinkets.”

When players manage to collect three or more golden amulets…

…they will be transported into an alternate reality teeming with treasure and winnings.

And because the mode is retriggerable the punters can find themselves spending a lot of time in this ancient temple raking in big wins.

…every spin in the extra spins mode comes with a random multiplier decided by a lucky wheel.

Supplier Going from Strength to Strength:

The reveal of their newest game comes very soon after the developer has presented their new marketing and gamification tool, Enhance, ahead of the iGB Live! 2019, one of the biggest igaming events, that wrapped up just recently.

Enhance is a tool built to boost player experience and help casino operators run their promotions better through the use of gamification which is proving to be very popular among casino owners both online and land-based.

Pragmatic has also opened an exciting chapter in the company’s history by entering the Colombian market for the first time through the country’s most popular online operator Wplay.co

The move has enabled Colombian players to enjoy Pragmatic’s range of casino table games, live casino, and video slots and let the developer expand further into the lucrative LatAm market.

The brand is one of the leading providers of iGaming content and solutions with a range of over 100 first-party and third-party titles which are mobile-friendly, available in many currencies and 26 languages.

It’s also known for its high-end live casino content which is shot with 4K cameras and uses actual professional dealers for all games.