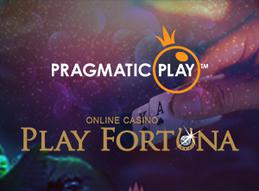 Game developer and casino supplier, Pragmatic Play, announced the signing of a deal with a casino operator, PlayFortuna.

Under the terms of the deal, the online venue will gain access to many of the player-favorite games such as Monkey Warrior, Wolf Gold, Mustang Gold,and the recently released, John Hunter and the Aztec Treasure.

Yossi Barzely of Pragmatic stated that the company is very pleased to have gone live on the platform and that they are “looking forward to seeing how the games perform on the casino.”

“We are developing some real momentum now, with the number of operator partnerships increasing every month. It is an exciting time for Pragmatic Play and fans of our games,” he concluded.

It’s an exciting time for the developer indeed as they have signed multiple partnerships in the last few months.

The company has signed deals with Austrian giant, Interwetten, and with CIS market heavy-hitter, 1xbet, which will see their live casino and bingo offerings becoming available across multiple markets.

Earlier this month, the deal with SoftSwiss was inked allowing for a multi-product content distribution integrating Pragmatic’s selection of games including their famous live casino offerings which are shot in 4K and feature professional dealers.

The developer has also entered the regulated Colombian market for the first time last week, by partnering with Wplay.co who is one of the biggest names in the LatAm gaming market which is an important strategic move for the company seeking to expand itself into as many markets as possible.

The team at PlayFortuna was quoted saying: “Pragmatic Play’s games are a fantastic asset alongside our existing content, and we’re thrilled to have them on board.

“We’re looking forward to offering our customers the very best in gaming from the award-winning company’s innovative portfolio.”

Pragmatic’s portfolio is now richer since the company unveiled the aforementioned John Hunter released and revealed an innovative RNG game, Sweet Bonanza, that does away with many slot conventions in order to offer something distinctive and new.

PlayFortuna is owned by Netglobe Services Ltd. and is licensed in Curacao. It is an online casino that features games by a number of well-known providers and operates across several markets. Their casino is offered in English, German, Polish, and Russian as the company is targeting both western and eastern European markets.

Pragmatic Play is a developer of slot games and live casino content such as blackjack and bingo. Their live casino offerings are shot in ultra-high definition and are mobile-friendly.

The company has over 100 first and third party products in their portfolio which are available in a number of currencies and in 26 languages.