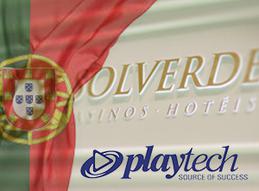 Under the terms of the agreement, the casino operator will migrate to Playtech’s IMS player management platform.

Solverde’s flagship casino site, CasinoSolverde, will use the IMS as its core platform which will allow it to launch a suite of Playtech games such as Arctic Treasure and Azteca and their suite of live casino games.

Expansion into a Lucrative Market:

This new partnership allows Playtech to enter the regulated Portuguese iGaming market that has been on the radar of many gaming companies due to its lucrativeness.

Operators have a generated a collective total of €48.3 million in the three months leading up to June 30th…

…which surpassed the previous quarterly record of €47.3m set in the opening quarter of this year.

Other casino suppliers such as SYNOT and Red Rake Gaming have been setting their sights on Portugal, with Red Rake signing a deal with Casino Portugal and SYNOT obtaining a gaming license.

“This is an exciting moment for CasinoSolverde.pt as we further develop the casino experience we offer to our customers,” Solverde board member, Manuel Silva Carvalho, said.

He further added that they are pleased to partner with Playtech to bring its industry-leading casino offering to the Portuguese audience and are “confident it will be a driver of growth for both businesses in Portugal.”

The COO of Playtech, Shimon Akad, added that the company is pleased to see its technology continuing to serve as the infrastructure of choice in regulated markets.

“This deal highlights the continued strength of our data-driven platform to offer integrated solutions to operators and we hope to announce further successes in regulated markets soon,” he concluded.

The news of this new partnership comes after the supplier has already announced a partnership with GVC that will see over 600 of its games appear on GVC leading brands in key regulated markets of Spain, Italy, Georgia, and the UK.

CasinoSolverde.pt is the newest casino from Solverde Group whose portfolio also includes five land-based casinos and four hotels in Portugal.

Playtech was founded in 1999 in Estonia and has since expanded to become one of the largest suppliers of casino content and management platforms. Considering themselves a one-stop-shop for gambling operators the company offers cutting-edge solutions to operators around the world.

Their product suite, including such games as the recently released, Space Digger, can be fully integrated into a cross-platform offering enabling access online and land-based terminals via a single account.