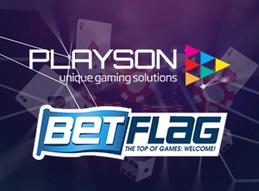 Game developer, Playson, and casino operator, Betflag, have announced a content deal that will shore up the operator’s game catalogue with Playson titles.

The deal will also allow Playson strengthen its foothold in the lucrative Italian iGaming market that they entered back in 2017 when an agreement was signed with Microgame to supply more than 35 online slots to the company.

Under the terms of the deal, Italian punters will gain access to acclaimed titles such as Book of Gold: Classic, Mighty Africa and Wild Warriors.

It’s been a busy time for both companies with Playson signing a deal with Pragmatic Solutions which saw the developers selection of games become a part of the Pragmatic content platform.

It’s been a period of strong growth for the developer, as they have recently signed deals to expand their market presence and game availability with various operators.

Back in May, their game offerings were added to the casinos of mobile-focused operator LeoVegas, and last month, the company announced its entry into the Lithuanian and Baltics markets through a deal with TOPsport.

The company then further cemented its Baltics position by partnering with Latvian operator Klondaika.

In June, it also brought its game offerings to the WinStar casino by partnering with big-name operator player GAN.

“BetFlag is a company that’s rapidly increasing its operations in Italy and we’re delighted to have teamed up with them.

“Our games have proven to be very successful in the Italian market and we can’t wait to offer them to BetFlag customers over the coming months.”

Dario Rusconi of Betflag expressed the importance of the deal for the company as they continue to enhance their portfolio of casino games by partnering with “the industry’s leading developers.”

“We’re thrilled to add Playson’s innovative slots to our offering and we look forward to working with them for many years to come,” he concluded.

Betflag is an online casino based in Italy, offering sports betting and casino games. The casino boasts a big selection of slots that’s only expanding as very recently the casino has signed a deal with Habanero.

The deal will see Habanero’s many games added to Betflag’s selection.

Playson is a game developer which supplies certified and tested, cutting-edge content worldwide. It operates on regulated markets such as Malta, Italy, Spain, Sweden, UK and is constantly expanding its presence.

Recently, the company has revealed Solar Queen which is a game inspired by the mysteries of ancient Egypt and features intricate gameplay modes including wilds and multipliers.

To celebrate the release, the developer held a tournament with a €30,000 prize pool of which €8000 was reserved for the first place winner.