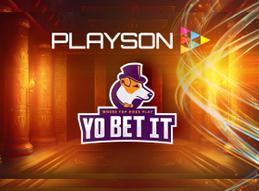 The partnership is a big step for the Malta-licensed developer as it will significantly boost their casino offering while they’re set to deliver a regular flow of new games over the coming months.

Under the terms of this deal, the operator’s customers will get access to some of Playson’s best-known games like Aztec Empire, Chicago Gangsters, and Dracula’s Family as well as newer titles like Viking’s Fortune: Hold and Win.

“We’re thrilled to have signed this agreement with Yobetit and to offer our suite of games to its players.

“We have been very impressed with Yobetit and look forward to working alongside them in the future.”

In the operator’s corner, Nikolai Livori, CEO of Yobetit commented that they take “great pride in our gaming content and we present it to our players” and that he is confident “they will enjoy this latest addition to your market-leading portfolio.”

“We’re delighted to be working alongside Playson and look forward to a long and mutually beneficial business relationship.”, he concluded.

The developer has stated in a press release that this partnership is an important step for both companies as they are seeing to expand across the Eastern European markets.

It’s good news for the company then…

…that they have recently obtained a license from the Romanian gambling authority which lets them enter this regulated EU market.

Showing how serious the desire to crack Eastern Europe is…

…they have also recently signed contracts with Lithuanian operator TOPsport and Lithuanian Klondaika.

The Romanian authorities aren’t the only ones who awarded licenses…

…as the company can also be proud of going through a tough audit by the Swedish authorities and passing it with flying colors.

...with two titles being released in two months.

The first of them is the enchanting Solar Queen, an Egypt-themed game in which players are invited to journey across the desert and offers up extra spins, sticky wilds, and progressive multipliers.

The game’s standout feature is the guaranteed wilds where certain fields on the board are marked and then spins later become wilds.

…the developer has put out Fruit Supreme 25 Lines, the newest entry in their long-running Timeless Fruits series.

The game takes after the classic fruit machines that used to dot land-based venues, arcades, and seaside amusement parks and breathes new life with amazing graphics and modern features.

A leading game developer and casino supplier which supplies its certified and tested content worldwide. Operating on the regulated markets of Malta, Italy, Spain, Sweden, and the UK they are known for their mobile-friendly HMTL5 games.

The company is based in Malta with offices in Ukraine, the United Kingdom, and Greece.