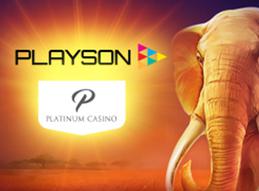 Casino content supplier, Playson, has announced it is moving further into the regulated Romanian market after signing a deal with the online division of Platinum Casino.

The partnership is an extension of the process which began when the developer was awarded a Class II gambling license from the Romanian gambling regulatory body.

The developer already holds licenses from UKGC and MGA.

It has been trying to crack the Eastern European market lately

With deals also inked with Lithuanian TOPsport and Latvian Klondaika.

Under the terms of the partnership, the developer will deliver its suite of innovative and popular slot games including the Timeless Fruit Slots series and new releases such as Solar Queen, Wild Warriors, Mighty Africa and Book of Gold: Classic.

“We’re excited to join forces with Platinum Casino to offer its players our extensive portfolio of top-quality slots.

“We are always striving to enhance our reach in regulated markets, and this is the latest in a string of strategic commercial deals which has seen us continue to expand our presence across Eastern Europe.”

Commenting on the partnership, Tatiana Grigorescu, PR Manager for Platinum Casino said the casino’s priority is to “grow our offering to players with the latest and greatest games” and that Playson “continues to produce an excellent selection of market-leading slots.”

“We are thrilled to have signed this agreement with [the developer] and look forward to a long and mutually beneficial relationship,” she concluded.

The venture into the Romanian market comes after the company has already taken on the European markets with a series of deals.

In addition to the deals in Latvia and Lithuania, it has also signed with Italian powerhouse Betflag which will help them strengthen their position in the country’s iGaming market.

Of receiving full certification from the Swedish Gambling Authority. The certification allows them full access to this lucrative market and was awarded after the company passed a stringent audit which tested their engineering, integration, and product departments.

Bringing the Heat with Fruit Supreme

In a busy month, the casino supplier has also released a new slot title, Fruit Supreme, adding yet another entry into their Timeless Fruit series.

The Timeless series is a collection of old-school games with a fruit machine aesthetic and Fruit Supreme uses this same framework to deliver classic thrills with a fresh coat of paint including robust gamification features.