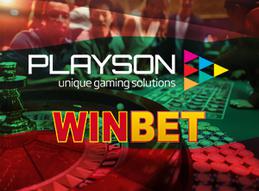 Casino software provider and game developer, Playson, is making another play to secure its foothold in the Eastern European regulated markets.

As a continuation of the process which began when the company obtained certification from the Romanian Gambling Authority, they have now signed a deal with WinBet which will let them go live in the neighboring country of Bulgaria.

Punters in this regulated market will soon be able to take a spin on some of the most innovative and high-performing games like the Timeless Fruit Slot series, Book of Gold: Classic, and Vikings Fortune: Hold and Win.

Blanka Homor, Sales Director for Playson, commented on the partnership

“We’re proud to have joined this partnership with WinBet and to offer our innovative slots to its players in Bulgaria and Romania.

“This new agreement gives us further access to the Eastern European market, affording more and more fans the opportunity to play our exciting stable of games.”

For WinBet, CEO Tsvetin Yordanov, has added the company is “delighted to have inked this deal to receive Playson’s fantastic portfolio of games” and that “its offering will be a welcome addition” for their customers.

He also added the casino operator is hoping for “a long and productive business relationship for years to come.”

This deal is just the latest in a series of moves the developer has made to better position themselves in the regulated markets of Eastern Europe.

It began in August when the company was awarded the Romanian license by the country’s gambling authority. Striking while the iron is hot, a content partnership with Platinum Casino followed immediately after and has seen many games go live with the operator.

The entry into the Romanian market continued…

…with another deal with one of the top operators in the country, Superbet. Emphasizing the importance of this deal Ms. Homor has stated: “expanding our presence in Romania has been paramount after obtaining our license from the ONJN (Romanian Gambling Authority).”

The developer has also signed deals with Yobetit and several other European operators like Klondaika and TOPsport.

One of the games punters in Romania and Bulgaria are enjoying right now is the recently released Fruit Supreme 25 Lines which is also the newest entry in the developer’s long-standing Timeless Fruits series.

The series is a big homage to the classic fruit machines but reinvented for the 21st century with robust gamification and promotional options.

A leading game developer and content supplier to the iGaming industry which offers certified and tested content worldwide. It operates on the regulated markets of Malta, Italy, Spain, Swede, the UK, Romania, and others.

The catalog of software currently contains more than 60 omnichannel titles all of which are based on HTML5 and mobile-friendly.

The company is based in Malta, with offices in Ukraine, the UK, and Greece.