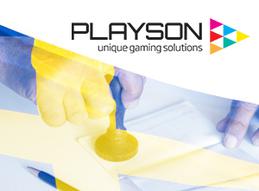 Casino supplier and game developer, Playson, has shared news of successfully completing an audit by the Swedish iGaming regulatory body.

This means that the developer is now fully certified in the recently reorganized and very lucrative Swedish gaming market.

The security audit, as the company explains in a press release, including a rigorous testing process of its engineering, integration and product departments.

In their press release, Playson stated…

…that this certification proves their commitment to the Swedish market as well as their robust approach to compliance and long-term focus on operating in regulated markets.

The developer has already been certifying its most popular games such as Book of Gold: Double Chance, Wild Warriors, Rise of Egypt, as well as the top-performing titles from the Timeless Fruits Slots series to be available to operators ever since the regulated market in Sweden has been established.

But now after completing an audit, and being fully compliant with the requirements set out by Spelinspektionen (Swedish Gambling Authority) the company is able to have full access to the Swedish market and bring its many games to punters in the Nordic country.

“As an agile provider, we have a strong infrastructure in place that can react quickly to regulatory changes. We are fully committed to working in regulated markets and look forward to consolidating our presence in Sweden over the coming months.”

The gaming supplier has been shoring up its European presence with strategic deals this year.

Last month, the company signed a deal with Betflag which would allow them to strengthen their Italian market position.

Representatives from the company noted that their games are already very popular in the Italian market and signing with a popular operator like Betflag will allow for even more punters in Italy to become fans.

Playson has also been eyeing the Baltics market…

…by partnering up with Lithuanian operator TOPsport and the Latvian Klondaika.

A Taste of Egypt with Solar Queen:

Amid news of partnerships and certifications, the developer has also announced a new game.

The developer has also celebrated the release with a tournament where a prize pool of €30,000 with one lucky winner walking away with €8,000.

The leading game developer supplies its certified and tested content worldwide. It operates on regulated markets like Malta, Italy, Spain, Sweden, the UK, Romania, and others.

Their portfolio currently contains more than 60 HTML5 and mobile-friendly games available across desktop computers and other devices.

The company is based in Malta with offices in Ukraine, the United Kingdom, and Greece.