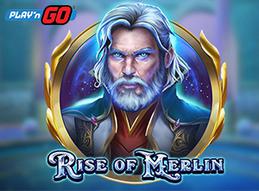 Leading supplier of slot games within the iGaming industry, Play'n GO, has been on a rampage recently with a bounty of new titles added to their expansive portfolio. The latest addition to it is Rise of Merlin, another Arthurian game that will boost the overall quality of global gaming market.

The 5-reel slot is based on the legendary tales of Merlin, a wizard from the mythical stories of King Arthur. However, it comes with a slight twist: instead of depicting him as a wise, old sage, players are being transported to Merlin's youthful days, which makes quite a difference from how he's usually portrayed.

There is still a whole array of creatures and items akin to the usual Merlin mythology...

...but besides mixing it up a little while staying true to the original idea, Play'n GO has come up with lots of other goodies that serve as a spice for this intriguing title. You will meet Archimedes the owl, as well as a great dragon, but what really takes the cake is the originality of the scatter symbol.

The icon, presented in the form of Merlin's magical crystal orb, also doubles as a wild, which effectively means it's constantly in play and substitutes for all other symbols in the game.

The Return of the Gamble Feature:

In Rise of Merlin, players will, at long last, see the return of the famed gamble option, one of the supplier’s classic features. As you may know, what it does is allow players to double or perhaps even quadruple their winnings by selecting the color or suit of a card that is facing downwards.

This old player favorite was a staple in many of the developer's older slot releases.

The company has never done a game with an Arthurian theme before...

...despite the fact that various slot games of this ilk already exist, such as Red Rake’s Knights title. As the company's CEO, Johan Tornqvist admits, they have been waiting for the right moment for it, as he believes there is no point in doing something just for the sake of doing it…

“We’ve released games based around many popular ideas and themes; for instance Ancient Egypt, Vikings and space aliens. However, we make sure that the game suits the theme, rather than just trying to jump on something popular for an initial buzz and, if you look at games like Legacy of Egypt and Viking Runecraft, you’ll see that our stance has worked. Rise of Merlin is an exciting game with great features to enjoy, and the theme of the game only adds to the player’s enjoyment, and that’s what we want.”

Departure From What is Ordinary:

In April, the developer has introduced yet another slot game that is wildly different from everything on offer at the present moment...

...when they premiered Mahjong 88, the brand's first 8x8 grid format game, based on the ancient tile game that is widely liked and played in Asia.

The game comes with quite a few surprises: it has quite a unique animation of the reels – instead of cascading, the symbols are revealed from underneath the grid, as would the matched tiles in the real game.

In Mahjong 88, each of four special sets of tiles is a wild with a special function. Also, as players advance in the game, seasons will change meaning that wilds will change as well. Spring, summer, autumn and winter wilds all have their distinctive characteristics.