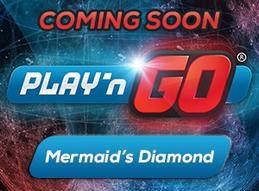 Växjö, Sweden online game developer, Play'n Go announced in June that the release of a new slot titled Mermaid’s Diamond was imminent before the end of the year. Some casinos let on yesterday that it could be available any day now with one source mentioning next week for the debut. Our research shows evidence of a September 20 unveiling, but premiere casinos such as Guts and NextCasino often get their hands on some games before others.

We were able to gain access to a demo version of the game with active pay tables. The first thing you'll notice is the reel configuration. The five-reels have an increasing and diminishing number of positions reading left to right so the end result is a play screen shaped somewhat like a diamond. Reels 1 and 5 have three symbols each; 2 and 4 display four reel positions and the central reel has five visible symbols.

The unique configuration, although seen before in Oryx slots, allows programmers to activate 720 virtual pay lines, or as Play'n Go calls them, "payways". Winning combinations across the hexagonal game area occur from both directions and do not need to be on a regimented pay line, simply on adjacent reels.

Bet sizes are fixed in a range from 0.20 to 100.00 per spin. The game is highly themed with a scantily clad mermaid as the central figure. Full body views are available when she expands as a wild symbol on the middle reel. A "mystical force" adds wilds to the reels randomly and a "supernatural power" helps trigger free spins. Players can collect diamonds to trigger Trident Wilds which create additional winning possibilities. While playing the base game, Trident Wilds are triggered at random adding substitutes to one or two reels while they are still spinning. The appearance of the special wild symbol does not guarantee a winning combination.

Mermaid’s Diamond has several additional features that set it apart from other games - as do most of Play'n Go's games. All games are mobile ready and play perfectly on desktop devices as well. Play'n Go has been developing mobile games since 2005 and launched their first mobile title in 2011.