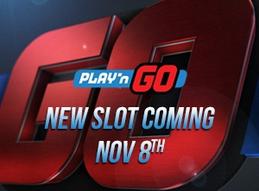 Play'n GO produces games for every taste and every appetite for risk. From the hardcore to the whimsical, to the "cute" nearly every math model and theme is covered by one or more of their hundreds of games for mobile and desktop play. Their upcoming release, Big Win Cat, falls into the latter, whereas Book of Dead or the wildly popular Energoonz and other most recent release, Reactoonz may crossover from whimsical to cute. We'll leave Leprechaun goes to Hell out of the mix and draw attention back to the newest slot title which is slated for release on November 8, 2017.

Big Win Cat is a 3x3 spinning game with 5 compulsory pay lines and a bet range of 0.05 to 100.00 per spin. The main protagonist is the Big Win Cat which is also a wild symbol.  In the base game, when there are no winning combinations but two reels have the same stacked symbol, the Respin of Luck feature is triggered. The remaining reel will spin again with the matching symbols on the other two reels held in place.

The best position to be in is when all 9 visual reel positions hold the same icon. This is called a "full house". When this occurs the Big Win Cat will playfully spin a special Wheel of Multipliers and award a multiplier of up to 10x for the spin.

In addition to the wild cat, other top-tier symbols include a goldfish, a pig, and a turtle while lower paying icons, often represented as 10, J, Q, K, A on some games are portrayed as an I Ching coin, bell, satchel, fan, and what appears to be some sort of prayer fetish or rattle.

The minimum, maximum, and some interim coin values can be changed by the operator. Online casinos in most markets also have a choice of RTP, or return to player percentage ranging from the default of 96.15% to a low of 84.26%. For casinos licensed in Malta, the lowest setting possible is 94.23%.

The game's volatility, a measure of how often you win how much is 5/10 making it medium, as opposed to a higher number which would result in very few, but very big wins or a much lower number which would result in many small wins and very few huge payouts. The most that can be won on a single spin is 80,000.00 if the screen were to be filled with wild cat symbols and the Wheel of Multipliers value were 10x.

Where To Play And Why

While the game falls in the middle of the variance or volatility spectrum, and may at first appear "too cute" for some serious players, it still packs the potential of an 800x total bet payout, offers occasional excitement in the re-spin feature which can culminate with the multiplier mini-game, and should provide good play time on average as long as you play at an MGA licensed casino like Casino Cruise or NextCasino. You're kind of on your own at many others. Just look for the "mga" logo on the footer of the casino webpage to know if the regulator requires the 96.15% or 94.23% RTP setting.