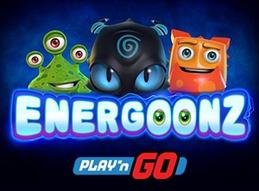 Play'n GO is set to release a follow up to its immensely popular Energoonz "gridslot" on October 24. Reactoonz is a cascading symbol game played on a 7x7 grid with symbols dropping down the grid to create winning combinations.  When five or more matching symbols are found in a cluster, touching each other horizontally and/or vertically, cash awards are paid depending on the value of the symbols. Winning symbols disappear to be replaced by new symbols from above. The reactions go on and the payouts continue until no more winning combinations are formed.

The new game has 5 Quantum Leap Charge Meters, and every winning combination contributes to charging them up one by one. Once a meter is fully charged it will add one of four random features to the game. The features are Implosion - changing from 3-6 symbols into wilds and obliterating all symbols touching them; Demolition - gets rid of all symbols with one-eye; Incision - slices a wild symbol into the center then makes two intersecting diagonal lines containing the same random symbol.

More of an arcade or novelty game than a traditional video slot machine, the paytable still offers rewards based on the number of matching symbols. The lowest tier symbols have a single eye and a cluster of 5 pays 1/10 total bet for the 'spin'. The highest tier symbols have two eyes and the most sought-after icon pays 1x for a cluster of 5 and 750x total bet for 15+ whereas 12, 13, or 14 in a cluster only pay 50x bet.

The Gargantoon is a 3-eyed monster who can drop 4-8 wild symbols onto the grid at random after any initial non-winning spin. When the Quantum queue reaches the Gargantoon (all 5 meters charged) a 3x3 monster fills 9 adjacent squares with wild powers. It will divide and move with each cascade - first into two 2x2 wilds and then into 9 individual wild symbols.

The charge meters do not reset until the end of the game.

The game is highly animated with 2x2 clusters becoming a single icon and electrical reactions occurring across all winning combinations. The features add their own elements of excitement to the game with sound effects and visuals illustrating the chain reactions before a win celebration is activated.

Reactoonz will be available at Guts, Casino Cruise, and other fine casinos that carry Play'n GO games.

Play'n GO is a game developer based in Växjö Sweden that began as a subcontractor lab back in 1997. They appeared on the scene in full force in 2007 and released their first full-featured mobile gaming product in 2011.

Play'n GO was nominated for the prestigious EGR Game of the Year award in 2017 for their innovative Gridslot, "Viking Runecraft". All Play'n GO games are developed in HTML5 to provide an enhanced user experience on all operating systems and devices.