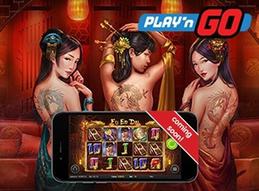 Play'n GO, a real money gambling game developer located in Växjö, Sweden continues to bombard the online market with truly innovative and beautifully rendered games. Reactoonz was a hit with the same players its predecessor, Energooz resonated with. Now, before tomorrows imminent release of Big Win Cat, yet another video slot is waiting at the gates to take the world by storm on November 15.

While rooting around the Play'n GO demo zone for Big Win Cat last week, we actually stumbled upon the new 5-reel, 10-line Fu Er Dai and took some guilty pleasure in trying the game out with no clue when it may be announced. Now we know. We found the game's rich graphics and dynamic soundtrack to exude opulence and sure enough, "Fu Er Dai" (Fuerdai) is a term in Chinese that translates literally to "rich second generation" and refers to the children of the nouveau riche in China.

The game icons depict various status symbols such as gold watches, the latest cell phones, reptile skin wallets brimming with credit and cash, keys to luxury autos and a wealthy young man who seems to be considering his next move. There is a stunningly rendered and animated golden dragon wild symbol that transforms in a dragon girl as seen from behind who expands to fill her entire reel.

All three central reels can be filled with the beautiful girls, each sporting a full back tattoo of a dragon. Whenever one or more appear they hold their positions and the remaining reels are spun again. Each one triggers at least one more spin. When two or more are active an initial sequence of five free games is awarded. Up to 20 consecutive free spins are possible per initial trigger. At least one prize-winning combination is guaranteed to appear on each "Win Spin".

Where to Find the New Games

While US players will not find these or any Play'n GO games available, they can be found in almost all regulated jurisdictions. Guts, Mr Green, and Videoslots usually have the games available on the release date.  Big Win Cat is scheduled for November 8, and Fu Er Dai will be released one week later.