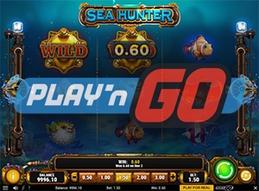 Following closely on the heels of last month's successful launch of Hugo 2, the Swedish company, Play’n GO has announced a new three-reel slot to be released before Christmas. The colorful underwater-themed video slot has five compulsory pay lines and a special cannon feature.

Consecutive winning spins activate the cannons which have power-up meters on them. Once charged to the proper level the feature will play on the next spin. If a non-winning spin occurs the cannons are drained of power and can be charged up again.

With six winning spins in a row, the Multiply Mortor feature is activated. Players receive one free spin with a guaranteed win. The cannons will shoot the reels to award a random mulitplier up to 15x.

Five consecutive wins will charge the Wild Warhead feature which releases 1, 2, or 3 wild symbols for the next spin.

The Sticky Shot feature requires four consecutive winning spins. It will shoot a random symbol and all matching symbols, including wilds, become sticky and a re-spin is awarded. This cannon will not reset with a losing re-spin but a winning spin will increase it by one.

Finally, the Growth Gun is triggered by just two winning spins in a row. When activated it will shoot at a random symbol and all matching symbols will be upgraded as if they were the next highest paying symbol on the pay table. Any symbol except the wild can be chosen at random.

The game accepts coins ranging from 0.01 to 20.00 each for a minimum bet of 0.05 and a max bet of 100.00 per spin.All pays are for three matching symbols on a payline with wild symbols worth 125x line bet. The next highest paying symbol is a blue killer whale and it returns 75x. Other top-tier icons include an orange octopus, red skate or manta ray, and a green sea turtle followed by various lower paying symbols such as jellyfish, puffer, angel, and gold fishes.

A full list of casinos that will carry the game can be found here.