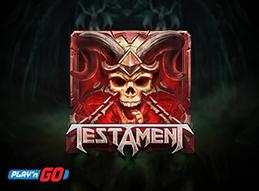 After the release of Ali Baba slot, Play’n GO has something else cooking for March. The provider is continuing its rollout with the musical Testament slot, the true homage to the same-named metal band.

As the inspiration for this release...

… the developer found in its eleventh album from 2012 ‘Dark Roots of Earth’ which represents a follow up to their 2008 release “The Formation of Damnation.”

Formed in 1983, a thrash metal band from Berkeley, California, became one of the most influential groups in history, with many fans. It's no wonder why Play’n GO decided to immortalize it in the form of engaging release which will attract the lovers of their sound.

With a substantial 20,000x win potential and three different game features plus Rise up and Testament Spins, it also offers the high volatility. While this will better suit the preferences of veteran players rather than beginners, it can still be a great filed for those wishing to try out their slot strategies.

Testament Slot Another Musical Addition To The Portfolio

This developer is known as a music slot specialist in the gambling industry. It has built quite a reputation in that field, by creating several music-based games, such as Demon, House of Doom, Sabaton and Black Mamba.

To make the releases more accurate, Play’n GO was collaborating closely with the bands and singers in the past. That hasn’t changed, and all current band members - lead vocalist Chuck Billy, guitarists Eric Peterson and Alex Skolnick, as well as drummer Gene Hoglan and bassist Steve Di Giorgio - were involved in the creation process of Testament title.

Importance of authenticity while creating branded music slots is crucial according to the chief product officer, Martin Zettergren who said:

“Creating a slot based on a band or artist carries an extra weight to it. You have to create a fun, unique slot for players to enjoy, but also represent the band and their music to fans accurately. This game is another “Testament” to our talent for creating entertaining slots, and our diligence in doing so.”

Peek at Mechanics and Special Features

Since the developer’s latest release is named after the band who revolutionized the thrash metal scene, it carries all iconic images related to this subculture in its gameplay - a skull, vampire, werewolf, skeleton and a shield. Amongst the symbols is also the album’s cover image, including standard royals from Jack to Ace card values.

The RTP ratio is 96.20% with maximum exposure of 2,000,000 in coins! Available in 37 languages, desktop and mobile casinos, this video slot is fully accessible in all recommended browsers and supported operating systems.

Three Song features are the highlight of the gameplay. The key to unlocking them is the scatter which can be the Dark Roots of Earth album cover image. Landing 2 scatters on a single base game spin awards 3 extra spins with one of the following bonus rounds:

At least 3 scatters appearing in a single spin will trigger the Rise up Spins with 4x or 20x multipliers. This mode is bringing 9 additional spins and if scatters smash through a stone blocker on all of them, it will initiate Testament Spins. When that happens, the player will receive 3 extra spins as well as any remaining Rise Up spins. During this feature, all Song features combine together meaning that wilds become sticky and also spread.