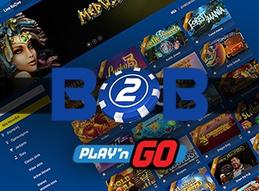 SoftSwiss, a white label online casino provider has announced this week that Play'n GO games have been integrated into the company's White Label offering. Some of the first casinos to pick up the games were Bitstarz and Playamo Casino, with more venues adding the suite daily. SoftSwiss made the announcement after delegates returned from the recent Berlin Affiliate Conference and EiG Expo.

SoftSwiss was established in 2008 and since that time has grown exponentially, branching out from their original mission as an online auction software provider to IT development for the iGaming industry beginning in 2012. The company operates worldwide with development labs in Belarus and headquarters in Curacao. In addition to their own games, they have integrated titles from top names such as NetEnt, Microgaming, Ainsworth, NYX Interactive and many others into their white label casino offering. SoftSwiss now offers operators over 2,000 online casino games to choose from.

Play'n GO began as subcontractors to the industry in 1997 and solidified their position as mobile game developers in their own right beginning in 2007. With offices and studios in Sweden and Hungary, the company has well over 100 titles on the market and have been releasing a game each week as 2017 winds up. In addition to their most recent video slot releases such as Hugo 2, Fu Er Dai, Big Win Cat, and Reactoonz, they also offer table games, scratch cards, and bingo products in HTML5 for play on all devices.

With the SoftSwiss integration, all of the games will now be available for play in Bitcoin.

SoftSwiss CEO Ivan Montik noted the prominence of Play'n GO as a developer who helps to define the industry and whose games are in high demand. He continued, "By adding Play’n GO content to our offering, we are able to meet the strong demand for their games from both SoftSwiss platform operators and their players.”

Play’n GO CEO Johan Törnqvist remarked: "This agreement will push our market-leading games out to a vast number of new customers, and I’m sure they’ll enjoy the extra content available to them," according to a press release this week.