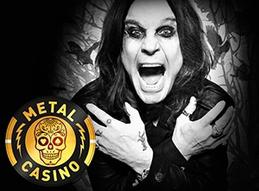 If anyone wondered what Ozzy Osborne might do with himself after his farewell tour of 2018-2020, wonder no longer. Metal Casino announced today that not only has the "prince of darkness" and "godfather of metal" signed on as brand ambassador for the hardcore casino, he has also become part owner of the company behind it.

Metal Casino launched only a few months ago and since their debut in August have become a gathering place for like-minded metalheads and fans of fast promos centered around a common interest - heavy metal music.

The gambling portal's website already bears his image along with an invitation in words only Ozzy would use and get away with. Of course, there's also a welcome offer that includes some of the site's secondary currency which users can trade in for bonuses and exclusive merchandise when they've collected enough. Super hardcore fans can buy items like an Epiphone guitar signed by Dregen or a Jackson with David Ellefson's signature on it. There's also a shedload of branded merchandise including caps, shirts, hoodies, and stickers etc.

Prior to the Rock and Roll Hall of Fame inductee signing on, Megadeth's David Ellefson, Scott Ian of Anthrax, Bumblefoot from Guns N Roses (2006-2014) and Dregen from the Swedish band, Backyard Babies and several others had already signed on to carry the UK Gambling Commission and MGA licensed casino to the larger world by virtue of their collective fame and love for metal music.

No mention of Metal Casino would be complete without noting that the company puts its money where its mouth is. This isn't a bunch of suits who set out to exploit a niche - the founders and partners are all passionate metalheads. The Metal Casino Foundation (MCF) supports festivals and studios where struggling rockers can catch a break and make their mark. They also support the Sea Shepherd Conservation Society - a no-nonsense get things done in your face protector of the oceans established in 1977.

For those who may only know Ozzy by his television personality, he took the original Black Sabbath band from an unheard stranger in 1968 to become what MTV has called 'The Greatest Metal Band of All Time' with songs like Ironman, Paranoid, and more. He's sold more than 100 million records as a solo artist and brought home three Grammy Awards. He was inducted into the Rock and Roll Hall of Fame 11 years ago along with Black Sabbath.

Here's what Ozzy had to say: "The guys at Metal Casino told me that their brand was all about being true, relevant and dedicated to the customer and that really resonated with me," he said. "To me, that translated as keeping it real, keeping it original, and doing it all for your fans, and that’s all I’ve been trying to [do] my whole f*ckin’ life."

Metal Casino's Chief Marketing Officer, Clas Dahlén nailed it when he added: "Ozzy Osbourne is a legend and now he’s a partner with Metal Casino. As far as we’re concerned, this is the biggest sponsorship deal in the world and we’re still in awe that our all-time hero is on board with the project.

“But the most important thing is, when we started Metal Casino, we knew it had to be more than just a casino, but a platform for a global community of metalheads and casino lovers to share their passion. With Ozzy’s help, we’re going to make this happen," according to a press release on BusinessWire at 2 am today.

The casino is laid out with themed categories making it easy to find games like the Megadeth slot from Leander Games, Hellboy from Microgaming, Alaxe in Zombieland by Genesis, and hundreds of other edgy games with brilliant graphics and stunning soundtracks.