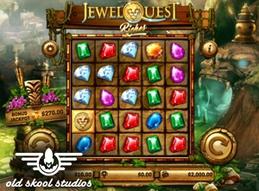 Vancouver, British Columbia-based Old Skool Studios has released their third game over Microgaming's Quickfire network. Jewel Quest Riches is their first branded game and is part of iWin's Jewel Quest Match-3 franchise. The game was released exclusively to Quickfire and can be picked up by any casino using the Microgaming multi-developer platform.

The game is described as immersive and appeals to casual puzzle game players, rewarding strategy with mystery, progression, prizes, and achievements.

Old Skool is an RNG Foundry partner. RNG Foundry is a self-described Gaming Accelerator that was launched in association with the UK's Velo Partners, an investment firm focused on gambling game development. The accelerator is akin to a business incubator and offers rising talent in the industry equity investment capital, technical resources, and distribution opportunities like the one announced Wednesday with Quickfire.

The game is played on a 5x5 grid. Rather than having spinning reels like a slot machine, gems and jewels cascade into place from above. Matching sets award cash prizes and then they disappear to be replaced with new jewels from above. Each winning combination increases the payout multiplier  1x up to 12x for twelve or more wins in a row.

Jewel Quest Riches has a skill-based bonus mini-game featuring 8 mythical worlds. Each level offers players a chance to solve puzzles using skills and strategy to earn more prizes. Hidden relics are collected and in a final mini-game, one of the relics is chosen to reveal a mystery multiplier.

Mike McGraw, Executive Producer at Old Skool Studios said of the release: "Jewel Quest Riches is our third game released on Quickfire and our first branded title. This ambitious game represents over two years of planning, design and development, and we couldn’t be more pleased with the iWin partnership. This stunning and innovative game really honors the classic Jewel Quest casual franchise, and we know players are going to enjoy it for hours on end.”

Andrew Hollis, Games Manager for Quickfire added: "Since its launch last month, Jewel Quest has performed very well for the operators that have taken it live. We are always looking for new, exciting and innovative content to integrate on to Quickfire and Jewel Quest ticks all three boxes.”

C.J. Wolf, CEO of iWin said: “This game highlights all of the features that made Jewel Quest a worldwide phenomenon,” according to a press release from Old Skool. He also mentioned that this is the first time the game has been made available for real money play.

Old Skool Studios created their first real money games as designers for the BC Lottery Corp in 2012. The company launched as a sister studio to LM Design Werks in 2009.

Their real money slot, Epic City went live at Bet365 and Unibet in 2014. It was picked up by Microgaming along with the promise of 3 new game titles in July 2016. One of the developer's most popular games to date is La Rouge. The black and white film noir cinematic thriller was released in May of this year to Videoslots and other casinos on the Quickfire network.