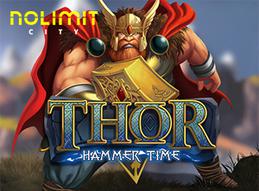 Nolimit City, the Malta-Sweden-India based game developer, is refreshing its slot lineup this August with Thor: Hammer Time, a fresh and full-featured take on the legend of Thor.

It’s a gritty and highly volatile game with a 5x3 layout and twenty paylines.

With four different features, there’s a lot in this new title to keep the most demanding punters occupied.

Taking the Nordic myth theme seriously, the game is full of runes, helmets, axes, chalices and of course – the Thor’s Hammer itself.

The game is available on desktop, and mobiles too where it can be played in portrait or landscape modes.

The offering is also full of features, with four different engaging mechanics that bring the world of Nordic myths to life.

The two randomly activated features are Rune Raze and Hammer Time. Occurring at any time during any normal spin, the first one will turn all low playing runes into one rune symbol.

Hammer Time does the same for high paying signs turning them all into the highest paying Thor’s Hammer.

The Lighting Bonus is represented with a Thor symbol appearing on reel five. Once the titular god appears he grants random multipliers, random sticky wilds or whole sticky wild reels.

Finally, the Asgard Spins are activated by collecting three scatter symbols. When two are collected, they nudge downward and give respins to land that elusive third one.

And if more than one scatter appears during respins…

…it gives out additional extra spins!

Nolimit City has recently partnered with Betclic, the Bordeaux-based sportsbook and casino operator. Under the terms of the deal, the entire Nolimit catalog will be available to punters across all Betclic brands in several different markets.

Among those games are the recently released Tombstone, a Wild West-themed game with the player-favorite xNudge feature and Tractor Beam, the irreverent take on UFOs and alien abductions.

“Being brought up in a small town with strong Viking heritage made this slot close to my heart, and to be honest, every slot provider needs a slot with a Viking theme! Thor: Hammer Time has one of the best KPI’s for big wins but also amazing KPI’s for the hit frequency for these big wins – it is a volatile game, but you’ll see the big wins hit with the force of lightning more than once – that’s for sure!”

The online casino platform and game developer offers high-quality content and services to casino and lottery operators around the world.

The company develops a platform in-house, delivering a strong and powerful engine that can handle large volumes of play and social interactions both on mobiles and desktop.

It offers a fun and engaging game portfolio for casino and lottery operators.