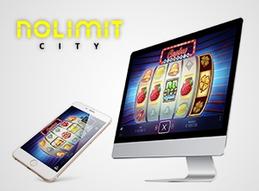 Stockholm, Sweden's up and coming game and casino platform developer Nolimit City has announced the release of their highly anticipated new slot title, Casino Win Spin. The game is described as a 'fast-paced fruit machine with clean and bright design, where old-school meets the future'.

The 5-reel, 3-position game has 20 pay lines and is inspired by the look of an old-fashioned jukebox along with classic fruit symbols on the reels. Features include guaranteed wins in the 'Spin 'til you Win' bonus, Expanding Wilds, and Win Spin Hot Zones. Gameplay is quick and the features are designed to keep a player entertained with every spin.

If wild symbols land in the hot zones all wilds become expanding wilds. Once the feature begins, players are guaranteed a win. The longer it takes to achieve a winning spin the more features are added including multipliers and spreading wilds.

Head of Sales & AM at Nolimit City, Malcolm Mizz commented on the game, saying: "With Casino Win Spin we continued refining our glossy and fine-polished graphics to create something spectacular, adding to our great portfolio of games. This high-paced machine has some thrilling features to look out for!"

Developed in HTML5 For All Players

According to press from the company, the game was developed and is deployed in HTML5 and is optimized for play on every device. The game debuts a new user interface that makes the game easy to play in landscape or portrait mode on tablets, Android, or iOS devices.

Casino Win Spin is the seventh slot released by the company so far.

Product Owner at Nolimit City, Per Lindheimer said that it is his favorite of the several titles they have released over the last few months. He added, "[I] can’t wait to see it hit our partners pages. The features are making your heart race – both in the main game and in the guaranteed win respin feature."

The game was released on Wednesday, January 31, 2018, to become available at partner casinos such as Mobilebet, SlotsMillion, and ComeOn!

The company developed its platform in-house from the ground up with multiple testing and quality assurance protocols in place. The platform is coupled with a bonus toolbox and one of a kind back office. Since the platform was built for scale and flexibility it can be tailored for any operator.