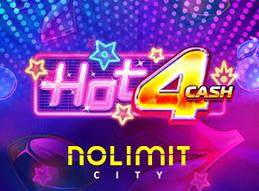 Malta-based software provider, Nolimit City, is celebrating its second release this month and is pushing the boundaries with a brave new game concept.

It’s Hot 4 Cash, and the developer says it’s the “most bold [sic] game statement to date.”

This is because Nolimit City has chosen to create a game that at first glance looks almost too simple.

But appearances are often deceiving…

…and that’s the case here too.

The unique and stand-out approach is building the game on just three symbols with three color variations. The cheery, the diamond, and the lucky seven come in three different colors and that’s all there is.

The main feature is called Hot Zones and there four of them in the corners of the 3x3 segment in the middle.

Getting a certain combination of symbols in those corners is what will activate one of three special features.

If the hot zones get filled with all of the same symbol types regardless of color, the game will go into Colossal Spin mode where the central 3x3 area becomes one huge symbol and reels 1 and 5 respin. This feature pays both ways.

…getting four symbols of the same color but different types will net punters the Lucky Wheels bonus which pays out instant cash prizes and has three levels of progressively increasing values up to 1000x of the initial bet.

Back to Back Release

The developer is celebrating because they managed to publish two games in one month, with the previous release being Thor: Hammer Time.

The previous release is home to many features as well, with the Lightning Bonus being the most prominent as it involves the Thunder God himself doling out random multipliers, sticky wilds, and even whole sticky wild reels.

...as they also made some pretty important deals last month.

In July, the company became a content partner for Wildz by Rootz, the hotly anticipated platform that blends machine learning, artificial intelligence, and real money gambling.

And that same month, Bordeaux-based, Betclic, decided to roll out Nolimit games across its many brands in multiple markets including Sweden, Portugal, and others while noting that the developer’s games are innovative and high-quality

A Malta-Stockholm based company that offers casino content and a casino platform for operators around the world. Their platform is developed in-house and from the ground-up and it delivers a strong and powerful engine that can take on large volumes of play and social interaction on both desktop and mobile.