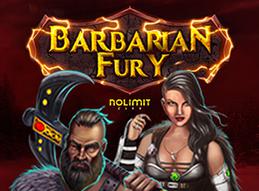 This slot takes inspiration from the rough and dreary historical chapter of the 6th century, when only the fittest would reign supreme. When the dreaded Barbarians were running free, trying to retain their stronghold against the rising European powers who wanted to oppress them.

Those days were dark and cold, with spoils of war and plunders were the only means of survival. The Barbarians were a ruthless force to be reckoned with, and Nolimit City did it best to picture them truthfully.

What Special Features Can We Look Forward to?

While the theme is a bit grim, the graphics and animation are on the top level. That doesn’t change when you switch on a smartphone or tablet since this game is completely mobile-friendly mobile-friendly.

The highest paying symbols are including the three Barbarian characters, with the bearded one being the most generous. A women warrior is right next to it regarding payouts, followed by the younger Barbarian.

This release is reintroducing the developer’s trade-marked and beloved xNudge® mechanic on a 4x5 reel frame, with a 25-pay line set. It also features respins and multipliers.

Special features you may encounter in this game include:

Going Back To Its Roots

With this new release and its special nudge features, the developer is reintroducing the mechanics which demonstrated to be one of the player’s favorite. It was first introduced in the studio’s slot Pixies VS Pirates, the game that became an instant hit amongst the punters.

“Back to the roots where xNudge® really begun with a nudge filled video slot in a blazing cold environment where the fire and wins will keep you warm. The innovative nudge mechanic to start off the Fury Spins is just as thrilling in main game as when you buy the feature – expect your blood to chill from the suspense!"

Speaking of its partners...

…the company is working closely with some of the biggest names in the industry such as operators LeoVegas, Casumo, Unibet, Betson and others. As CTO and Co-Founder of Nolimit City, Jonas Tegman, explained in interview for LCB, the studio has gained a lot by collaborating with these reputable brands and extended its reach to the wider audience.

The studio is known for making high-quality and authentic games that can suit the preferences of different types of players. It is also delivering a strong and powerful engine that can take large volumes of play and social interaction in its stride, on both desktop and mobile. Barbarian Fury slot is the latest release by this provider who has announced more exciting titles for this year.