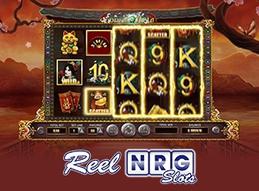 ReelNRG, a slot game developer with offices and labs in London and Hyderabad, India has announced the launch of their newest game, Goddess of Asia. The company's leading games can be found at regulated casinos such as BetVictor for mobile or desktop play.

The new 3x5 video slot features stunning graphics and a dynamic soundtrack. The opening screen depicts a fire-laden sunset and a walk bridge with cherry blossoms fluttering to the ground. Once game play begins the reels become energized with electrical effects in visual and audio.

The Goddess of Asia wild symbol doubles all line wins it is part of and golden nugget scatters trigger a free spins bonus mini-game where players choose envelopes to open that will reveal additional free spins.

Additional features include a paper fan symbol that can initiate a respin with 5x payouts when it appears on the second reel. When it lands on the central reel the symbol will expand to fill it with an expanding wild symbol for the greatest chance to win a top prize on the respin that follows.

ReelNRG co-founder and CEO, Calvin Kent said: "We are thrilled to announce the launch of Goddess of Asia, a game that captures all the magic and mystery of the ancient orient with tightly modelled gameplay and colourful design."

He went on to speak of the company's commitment to provide players with excitement and intuitive gameplay. He added, "I am sure slots fans old and new will love the game’s innovative bonus features."

The company first launched in 2015 and has seen increased momentum and wide acceptance of its innovative and unique casino games. BetVictor signed with the ReelNRG in late October in a deal that delivers their games through Isle of Man content aggregator, GAMEIOM, who signed a deal with BetVictor in June. In addition to Goddess of Asia, the company's Shanghai Respin slot will also debut first in BetVictor's Asian markets followed by release to the UK and other European markets later in the year.

Kent had this to say about signing with the William Chandler company last month: "Delivering a unique and immersive online casino experience is a priority for ReelNRG, and we look forward to working closely with BetVictor as we continue to grow our reach."