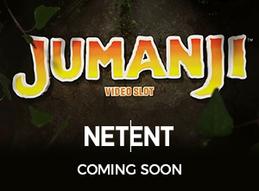 NetEnt has announced that the gaming solutions provider has signed a deal with Sony Pictures Consumer Products to roll out a video slot based on the original 1995 feature film, Jumanji. The game is expected to launch later in 2018.

Prior to Christmas 2017, Sony released Jumanji: Welcome to the Jungle, some 21 years after the original film, based on a 1981 illustrated children's book and starring the late Robin Williams began the movie franchise. The holiday release has done well with global box office receipts in excess of $676 million.

NetEnt is offering a sneak peek at Jumanji during the ICE Totally Gaming event in London which runs Tuesday, Feb. 6 through Thursday Feb. 8. Top performing branded games in NetEnt's current portfolio include  Guns N’ Roses™, Planet of the Apes™, and Motörhead Video Slot™.

20 Years Appealing to All Ages

Fagerlund went on to say: "The original Jumanji movie, which debuted in 1995, remains a moviegoer favorite and continues to demonstrate its cross-generational appeal more than 20 years later! Also, with the recent release of the new film, the Jumanji brand is more popular than ever. We’re excited for the game launch in 2018," according to a press release from the company.

NetEnt's October 23, 2017, release of Planet of the Apes slot, release through a deal with 20th Century Fox, was the first time any movie from the world's largest film franchise had been licensed for a video slot title and some observers expect the company to return to that series of films for further game development.

Look for news of Jumanji's release at online venues such as Mr Green, Guts, and Video Slots casinos.